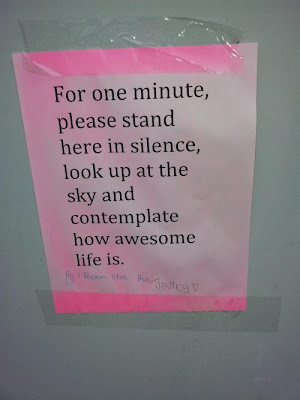 Quite a challenge!!!  To actually consider life is the beginning of sentience.  We may know many things, have done many things and are the equal of all those around us (maybe even a bit better than some), but if we have not taken the time to contemplate what life is all about, we really haven't lived.  What is life anyway?  Do we just grow up to grow old and then whither and die?  Is there not something more to it all?  Look up!  How marvelous is the complexity of the world above and below!!!  Did it just happen?  Is there no pattern??  Is there no design behind it all, even though the vast interwoven complexity of our environment is obvious?  Yes, is my answer and God is the source!!!  Read the following chapter from the book of Psalms, slowly and notice the pause (the Selah) as you read...

[1] God is our refuge and strength,
a very present help in trouble.

[4] There is a river, the streams of which make the city of God glad,
the holy place of the tents of the Most High.


[6] The nations raged. The kingdoms were moved.
He lifted his voice, and the earth melted.


[7] Yahweh of Armies is with us.
The God of Jacob is our refuge.

[8] Come, see Yahweh’s works,
what desolations he has made in the earth.


[9] He makes wars cease to the end of the earth.
He breaks the bow, and shatters the spear.
He burns the chariots in the fire.

Instead of formatting this passage, I left it "as is" (except for the one bold addition) in order to let the impact of the original formatting be felt.  We are not alone, we need to realize that and pause to consider that which is greater than ourselves... God.  Things don't happen by accident, but when they do, good is usually NOT THE OUTCOME!!! If we as mere mortals can organize the world around us to aid in survival and pleasure, how were we designed that way?  Since we are the most intelligent beings on the planet and we are subject to mortality, shouldn't it reasonably be assumed something greater designed us?  Take all the time you want, think, contemplate, ponder, for this world is indeed wonderful!!!  And so are we... and so is God!!!  I give you a second challenge... read verse 10 and take God's challenge "Be still and know that I am God".  Its even better than the challenge in the picture!!!!!
Email ThisBlogThis!Share to TwitterShare to FacebookShare to Pinterest

http://executableoutlines.com/top/drift.htm
What is the process of those who fall away from Christ?...Gary
Email ThisBlogThis!Share to TwitterShare to FacebookShare to Pinterest
Newer Posts Older Posts Home
Subscribe to: Posts (Atom)