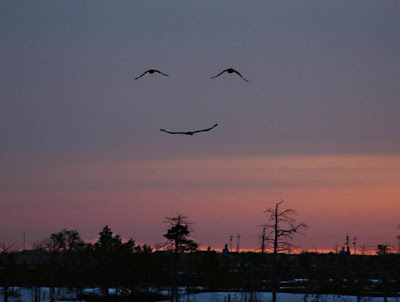 Sometime ago, I found this picture on the web under a listing called "being in the right place at the right time". Its just three birds flying, but I see a smiling face; how about you? Just coincidence, right? Well, yes and no. Yes, because after all, it IS just three birds and no, because God put it there at just the right time for YOU to see it. If you get the last sentence, then you really "get" this blog. Nothing occurs by accident, if your eyes are open you can easily see God in the smallest of things and the world becomes a window through which God can teach you. The following is a "chance" lesson for us all.
Matthew 17:24-27 (WEB)
24) When they had come to Capernaum, those who collected the didrachma coins came to Peter, and said, “Doesn’t your teacher pay the didrachma?”
25) He said, “Yes.” When he came into the house, Jesus anticipated him, saying, “What do you think, Simon? From whom do the kings of the earth receive toll or tribute? From their children, or from strangers?”
26) Peter said to him, “From strangers.” Jesus said to him, “Therefore the children are exempt.
27) But, lest we cause them to stumble, go to the sea, cast a hook, and take up the first fish that comes up. When you have opened its mouth, you will find a stater coin. Take that, and give it to them for me and you.”
(Matthew 17:24-27, WEB)

Jesus taught from nature and this episode is just one example. I love what it says and also what it doesn't say. The teaching is that the sons of God are above tribute. How special those who love God are! Its interesting to me what the passage does not say: Namely, that Peter actually did as he was told... it is assumed. Since the Bible doesn't say anything more about it, I can only assume Peter did it, but the doing somehow just doesn't SEEM necessary. I prefer to think that Peter did it because it makes sense, just like it makes sense that God would allow birds to smile at me. Somehow this just seems to make the world a wonderful place to live in. Only thing left to do is to go fishing; who knows what I might catch?
Email ThisBlogThis!Share to TwitterShare to FacebookShare to Pinterest
Newer Posts Older Posts Home
Subscribe to: Posts (Atom)