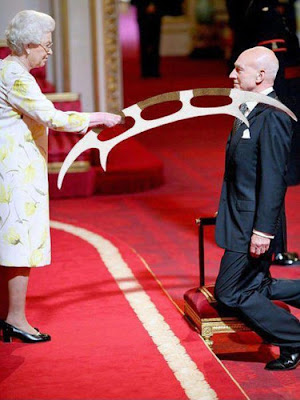 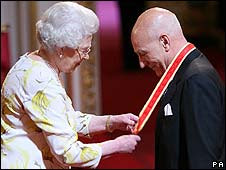 Sometimes it takes awhile to find the truth about things, as the above two pictures illustrate.  I saw the top picture first and thought "Patrick Stewart was knighted?"  A closer look made me think about the "Sword" the Queen of England used and after a little investigation I soon learned that this did indeed happen to "Jean Luke Picard" a few years ago (but not with the Batleth).  For some time now Christians have been the victims of a lot of bad press.  So, its time to set the record straight.  The overwhelming majority of us are very good people and are worth any and all praise you can possibly imagine.  We try to follow Christ in the best way we can understand and should not be maligned, criticized or abused, period!!! In fact, we are royalty....

1 Peter Chapter 2  1 Putting away therefore all wickedness, all deceit, hypocrisies, envies, and all evil speaking,  2 as newborn babies, long for the pure milk of the Word, that you may grow thereby,  3 if indeed you have tasted that the Lord is gracious: 4 coming to him, a living stone, rejected indeed by men, but chosen by God, precious.  5 You also, as living stones, are built up as a spiritual house, to be a holy priesthood, to offer up spiritual sacrifices, acceptable to God through Jesus Christ.  6 Because it is contained in Scripture,
“Behold, I lay in Zion a chief cornerstone, chosen, and precious:
He who believes in him will not be disappointed.”
7 For you who believe therefore is the honor, but for those who are disobedient,
“The stone which the builders rejected,
has become the chief cornerstone,”
8 and,
“a stone of stumbling, and a rock of offense.”
For they stumble at the word, being disobedient, to which also they were appointed.  9 But you are a chosen race, a royal priesthood, a holy nation, a people for God’s own possession, that you may proclaim the excellence of him who called you out of darkness into his marvelous light:  10 who in time past were no people, but now are God’s people, who had not obtained mercy, but now have obtained mercy.  11 Beloved, I beg you as foreigners and pilgrims, to abstain from fleshly lusts, which war against the soul;  12 having good behavior among the nations, so in that of which they speak against you as evildoers, they may by your good works, which they see, glorify God in the day of visitation.  13 Therefore subject yourselves to every ordinance of man for the Lord’s sake: whether to the king, as supreme;  14 or to governors, as sent by him for vengeance on evildoers and for praise to those who do well.  15 For this is the will of God, that by well-doing you should put to silence the ignorance of foolish men:  16 as free, and not using your freedom for a cloak of wickedness, but as bondservants of God

OK, you know where this is going... we are royalty.  We are the spiritual children of the greatest king imaginable and so we need to act like it.  Take you Christian life seriously and others will take YOU SERIOUSLY!!!  Stand up and be counted as a faithful Christian!!!  Your "knighting" was at your baptism (where your sins were washed away) and you are special because your heavenly father is special.  Very few of us will be as famous as Sir Patrick Stewart and the Kings or Queens of this world may never give us honor, but if the king of kings does, who cares?  Having said all this... it would be nice to own a Batleth, though!!!!

"ACTS OF THE APOSTLES" Chapter Five by Mark Copeland