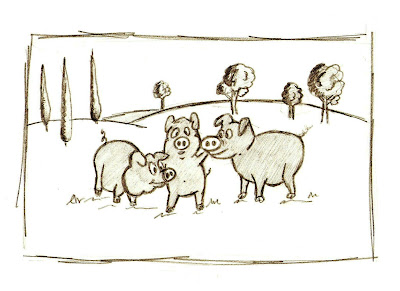 The Three Little Pigs Three Little Pigs went out to dinner one night. The waiter came and took their drink order. 'I would like a Sprite,' said the first little piggy.'I would like a Coke,' said the second little piggy.
'I want beer, lots and lots of beer,' said the third little piggy. The drinks were brought out and the waiter took their orders for dinner. 'I want a nice big steak,' said the first piggy. 'I would like the salad plate,' said the second piggy.
'I want beer, lots and lots of beer,' said the third little piggy. The meals were brought out and a while later the waiter approached the table and asked if the piggies would like any dessert. 'I want a banana split,' said the first piggy. 'I want a cheesecake,' said the second piggy.
'I want beer, lots and lots of beer,' exclaimed the third little piggy. 'Pardon me for asking,' said the waiter to the third little piggy,' But why have you only ordered beer all evening?' You're gonna LOVE me for this.... The third piggy says - 'Well, somebody has to go 'Wee, wee, wee, all the way home!
I know, I know, its simple. But there is something interesting here if you think about it; the pigs obviously had gotten together and made a plan before they went out to dinner. God has made a plan too, read about it from the book of the book of Ephesians:
Eph 3:1 For this reason I, Paul, a prisoner for Christ Jesus on behalf of you Gentiles--
Eph 3:2 assuming that you have heard of the stewardship of God's grace that was given to me for you,
Eph 3:3 how the mystery was made known to me by revelation, as I have written briefly.
Eph 3:4 When you read this, you can perceive my insight into the mystery of Christ,
Eph 3:5 which was not made known to the sons of men in other generations as it has now been revealed to his holy apostles and prophets by the Spirit.
Eph 3:6 This mystery is that the Gentiles are fellow heirs, members of the same body, and partakers of the promise in Christ Jesus through the gospel.
Eph 3:7 Of this gospel I was made a minister according to the gift of God's grace, which was given me by the working of his power.
Eph 3:8 To me, though I am the very least of all the saints, this grace was given, to preach to the Gentiles the unsearchable riches of Christ,
Eph 3:9 and to bring to light for everyone what is the plan of the mystery hidden for ages in God who created all things,
Eph 3:10 so that through the church the manifold wisdom of God might now be made known to the rulers and authorities in the heavenly places.
Eph 3:11 This was according to the eternal purpose that he has realized in Christ Jesus our Lord,
English Standard Version
Simple, people other than Jews have a way to God and that is through Jesus. No, it doesn't have to be complicated to be good and simple doesn't mean stupid. What it does mean is that all we have to do is to follow the plan and the man Jesus and that's that! True genius is making the complex simple while retaining its depth of meaning! Well, it would have to be that way if I were to understand it.
Thanks to Kathi Hall for sending me the story and to Steve Dixon for doing the drawing!
Email ThisBlogThis!Share to TwitterShare to FacebookShare to Pinterest
Newer Post Older Post Home