Seeing God for what HE is 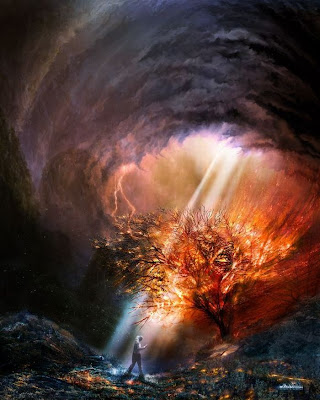 It seems to me that who did this picture had the tale of Moses and the burning bush in mind. So, here is the passage from the book of Exodus.
Ex 3:1-6
3 Now Moses was keeping the flock of Jethro, his father-in-law, the priest of Midian, and he led the flock to the back of the wilderness, and came to God's mountain, to Horeb.
2 The angel of Yahweh appeared to him in a flame of fire out of the midst of a bush. He looked, and behold, the bush burned with fire, and the bush was not consumed.
3 Moses said, "I will turn aside now, and see this great sight, why the bush is not burnt."
4 When Yahweh saw that he turned aside to see, God called to him out of the midst of the bush, and said, "Moses! Moses!" He said, "Here I am."
5 He said, "Don't come close. Take your sandals off of your feet, for the place you are standing on is holy ground."
6 Moreover he said, "I am the God of your father, the God of Abraham, the God of Isaac, and the God of Jacob." Moses hid his face; for he was afraid to look at God. WEB
Astounding! Just consider for a moment what is happening here; God is speaking with a man! Even more puzzling is the comparison of "The angel of Yahweh" (verse 2) with the statement from verse 4 that "God called to him out of the midst of the bush". Is God an angel? How could this be? Well, the term angel means messenger, so we have God being a messenger of himself, humm. In the new testament book of John it says that no man has seen God, so is there a contradiction? No, because I believe that the Exodus passage is referring the preincarnate Jesus. Not only here, but in every instance of God directly interacting with man. Think about it, in the Godhead, God the father directs, the Son materially interacts with mankind and the Holy Spirit empowers. There is not a God of the Old Testament and a God of the New, but rather One God manifesting himself in various distinct and yet collective ways. All this may seem very difficult, but consider how difficult it must have been for Moses to be there? I know it would be for me, especially as I don't like heights!
Email ThisBlogThis!Share to TwitterShare to FacebookShare to Pinterest
Newer Post Older Post Home