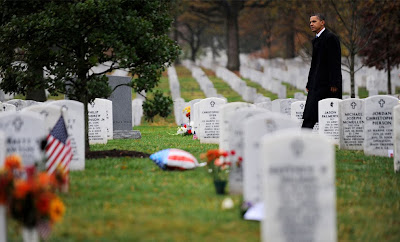 This picture, taken on veteran's day, says a lot. It speaks of the sacrifice that many have paid for our freedom. When you consider the number who have died it is overwhelming. Consider the wounded, the psychologically handicapped and the loss these things have had on all the families. Barak Obama has a very serious look on his face and with very good reason; soon he will be forced to make some very tough military decisions and every one of us should pray for him!!! Its hard not to think of sacrifice and immediately think of Jesus. Here is just one passage to reflect upon.

Romans 3:21-26 WEB (R)
(21) But now apart from the law, a righteousness of God has been revealed, being testified by the law and the prophets;
(22) even the righteousness of God through faith in Jesus Christ to all and on all those who believe. For there is no distinction,
(23) for all have sinned, and fall short of the glory of God;
(24) being justified freely by his grace through the redemption that is in Christ Jesus;
(25) whom God set forth to be an atoning sacrifice, through faith in his blood, for a demonstration of his righteousness through the passing over of prior sins, in God's forbearance;
(26) to demonstrate his righteousness at this present time; that he might himself be just, and the justifier of him who has faith in Jesus.

The fact is simple; one man died for all. One very, very special man! But that one sacrifice has had more impact upon the world that every soldier who paid the ultimate price. If the sacrifice of so many given for freedom in the here and now is precious, how much more the blood of Christ that has eternal consequences!!! Veteran's day may be over, but take a moment and remember what has been given to you, not only now but in the hereafter. And pray with thanksgiving and then pray some more!
Email ThisBlogThis!Share to TwitterShare to FacebookShare to Pinterest
Newer Post Older Post Home