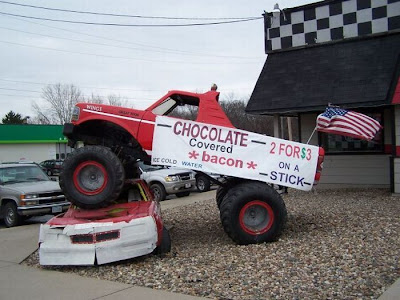 Yummy; chocolate covered bacon! When I told my son-in-law about it, he wasn't a bit surprised and said that he had had one at the Florida State Fair. Then, he went on to tell me about his dream meal... a sandwich of... fried donuts with a hamburger in the middle, garnished with three or four of these little bacon things and deep fried butter for dessert. There was something else too, but all I can think of is LARD and that can't be right, because everyone knows LARD just doesn't jive with the dessert. What ever the final meal was; I had one knee jerk reaction...YUK! It was just too much for even me to think about eating (and believe me, that takes a lot!!). Sometimes it takes an extreme for a point to be made and this passage from the book of Ephesians fills the bill.
Ephesians 1:17-21 WEB (R)
(17) that the God of our Lord Jesus Christ, the Father of glory, may give to you a spirit of wisdom and revelation in the knowledge of him;
(18) having the eyes of your hearts enlightened, that you may know what is the hope of his calling, and what are the riches of the glory of his inheritance in the saints,
(19) and what is the exceeding greatness of his power toward us who believe, according to that working of the strength of his might
(20) which he worked in Christ, when he raised him from the dead, and made him to sit at his right hand in the heavenly places,
(21) far above all rule, and authority, and power, and dominion, and every name that is named, not only in this age, but also in that which is to come.

Consider the power of Jesus; above everything! That's way more that I could even begin to understand, let alone comprehend. Add the time aspect to it, and it makes my head hurt. But, I am glad I understand at least one thing... if you are on the winning side... you win. And I don't mean some crazy sandwich, either.
Email ThisBlogThis!Share to TwitterShare to FacebookShare to Pinterest
Newer Post Older Post Home