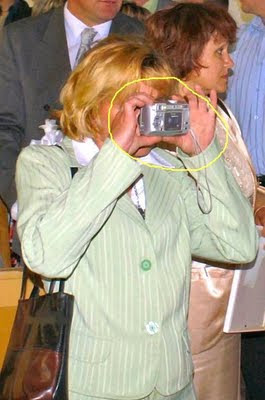 If you have ever watched "that 70's show" then you may remember Eric's girlfriend and her mother (who was a little dense [to put it mildly]). Personally, I think the thing about blonde's is all a put on, but who knows? This lady sure isn't going to win any awards for photography in the near future. But, hey, who among us hasn't screwed up occasionally? Sometimes we do things wrong because we are distracted or tired or angry or one of the seemingly endless list of possibilities, but PRIDE? Here is a case of pride and it a full blown one......

Acts 8:9-24 (WEB)
9) But there was a certain man, Simon by name, who used to practice sorcery in the city, and amazed the people of Samaria, making himself out to be some great one,
10) to whom they all listened, from the least to the greatest, saying, “This man is that great power of God.”
11) They listened to him, because for a long time he had amazed them with his sorceries.
12) But when they believed Philip preaching good news concerning the Kingdom of God and the name of Jesus Christ, they were baptized, both men and women.
13) Simon himself also believed. Being baptized, he continued with Philip. Seeing signs and great miracles occurring, he was amazed.
14) Now when the apostles who were at Jerusalem heard that Samaria had received the word of God, they sent Peter and John to them,
15) who, when they had come down, prayed for them, that they might receive the Holy Spirit;
16) for as yet he had fallen on none of them. They had only been baptized in the name of Christ Jesus.
17) Then they laid their hands on them, and they received the Holy Spirit.
18) Now when Simon saw that the Holy Spirit was given through the laying on of the apostles’ hands, he offered them money,
19) saying, “Give me also this power, that whomever I lay my hands on may receive the Holy Spirit.”
20) But Peter said to him, “May your silver perish with you, because you thought you could obtain the gift of God with money!
21) You have neither part nor lot in this matter, for your heart isn’t right before God.
22) Repent therefore of this, your wickedness, and ask God if perhaps the thought of your heart may be forgiven you.
23) For I see that you are in the gall of bitterness and the bondage of iniquity.”
24) Simon answered, “Pray for me to the Lord, that none of the things which you have spoken happen to me.”

It must have been hard to have been put on the sidelines when you are accustomed to being called .."that great power of God"!! So, when he saw power of the Holy Spirit, he actually thought he could BUY it!! Talk about dumb!!! But he learned, he repented and moved on. Hopefully, our BLOND lady will someday actually learn how to use that camera or she will have a lot of pictures of her nose (I sincerely hope she doesn't have a cold in the nose). Life is full of our mistakes, from learning to walk to understanding God's ways, it is just one litany of trial and error. Hopefully, we will wind up pleasing God in the end. Humm, I wonder if God keeps a scrapbook of our stupidity; if so, the lady in the picture may find this picture as the cover.
Email ThisBlogThis!Share to TwitterShare to FacebookShare to Pinterest
Newer Post Older Post Home