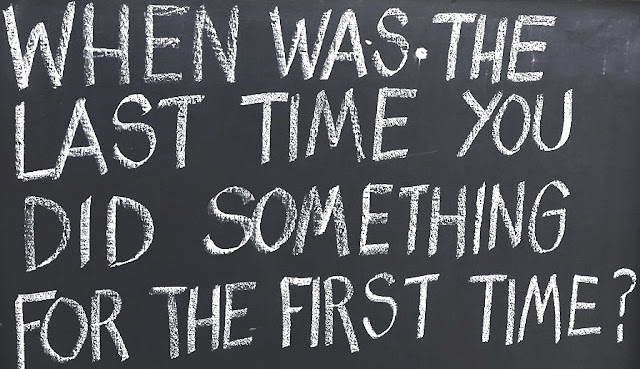 I remember what is was like to be young; my thinking, my attitudes, my actions. Growing up felt good, but there were many mistakes. I would do something and keep on doing it until I got it right.

Today, I still make mistakes (especially when I do something for the first time) but I still like to try new things. This is why I why I enjoy using computers so much; they provide a platform to try new things, explore new possibilities and ways of doing things.

As I thought about the chalkboard and its message, I asked myself a question: How did God feel about the first things of creation?

Of course, the answer was found at the beginning of the Bible, at the end of its first chapter….

Genesis 1 (World English Bible)
1 In the beginning, God created the heavens and the earth.  2 The earth was formless and empty. Darkness was on the surface of the deep and God’s Spirit was hovering over the surface of the waters.

9  God said, “Let the waters under the sky be gathered together to one place, and let the dry land appear”; and it was so.  10 God called the dry land “earth”, and the gathering together of the waters he called “seas”. God saw that it was good.  11 God said, “Let the earth yield grass, herbs yielding seeds, and fruit trees bearing fruit after their kind, with their seeds in it, on the earth”; and it was so.  12 The earth yielded grass, herbs yielding seed after their kind, and trees bearing fruit, with their seeds in it, after their kind; and God saw that it was good. 13 There was evening and there was morning, a third day.

20  God said, “Let the waters abound with living creatures, and let birds fly above the earth in the open expanse of sky.”  21 God created the large sea creatures and every living creature that moves, with which the waters swarmed, after their kind, and every winged bird after its kind. God saw that it was good.  22 God blessed them, saying, “Be fruitful, and multiply, and fill the waters in the seas, and let birds multiply on the earth.”  23 There was evening and there was morning, a fifth day.

31  God saw everything that he had made, and, behold, it was very good. There was evening and there was morning, a sixth day. (Emboldened text above is for emphasis)


Notice that when God made something, he made directions for its use and commented about what he thought about it..

When completely finished, HE said that all his creation was very good!!! Everything was made perfectly, from the stars in the heavens to the smallest microbe. All put together in perfect harmony according to his will. I can only remember a few times in my life that I felt that way about anything I created!!

All this just brings to mind the words of the prophet Isaiah...

Isaiah 55 (WEB)
8 “For my thoughts are not your thoughts, neither are your ways my ways,” says Yahweh.
9 “For as the heavens are higher than the earth,
so are my ways higher than your ways,
and my thoughts than your thoughts.
10 For as the rain comes down and the snow from the sky,
and doesn’t return there, but waters the earth,
and makes it grow and bud,
and gives seed to the sower and bread to the eater;
11 so shall my word be that goes out of my mouth:
it shall not return to me void,
but it shall accomplish that which I please,
and it shall prosper in the thing I sent it to do.