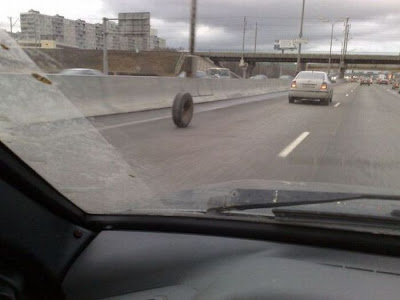 You are driving along and suddenly you see a tire passing your vehicle; hard to believe isn't it? However, one day I was in my father's "plumbing truck" and as we were going down second avenue in Troy, N.Y. a tire suddenly appeared ahead of us on the passenger side. I wouldn't have believed this picture unless I had actually seen it myself; but it happened. A situation occurred in the New Testament that has some similarities. This passage from the book of John tells the story.


John 20:19-31 Complete Apostles' Bible
(19) Then, the same day at evening, being the first day of the week, when the doors were shut where the disciples were assembled, for fear of the Jews, Jesus came and stood in the midst, and said to them, "Peace to you."
(20) And having said this, He showed them His hands and His side. Then the disciples rejoiced when they saw the Lord.
(21) Therefore Jesus said to them again, "Peace to you! Just as the Father has sent Me, I also send you."
(22) And when He had said this, He breathed on them, and said to them, "Receive the Holy Spirit.
(23) If you forgive the sins of any, they are forgiven them; if you retain the sins of any, they have been retained."
(24) But Thomas, one of the twelve, the one called the Twin, was not with them when Jesus came.
(25) The other disciples therefore said to him, "We have seen the Lord." So he said to them, "Unless I see in His hands the print of the nails, and put my finger into the print of the nails, and put my hand into His side, I will by no means believe."
(26) And after eight days His disciples were again inside, and Thomas with them. Jesus came, the doors having been closed, and stood in the midst, and said, "Peace to you!"
(27) Then He said to Thomas, "Bring your finger here, and see My hands; and bring your hand here, and put it into My side. Be not unbelieving, but believing."
(28) And Thomas answered and said to Him, "My Lord and my God!"
(29) Jesus said to him, "Because you have seen Me, you have believed. Blessed are those who have not seen and yet have believed."
(30) And truly Jesus did many other signs in the presence of His disciples, which are not written in this book;
(31) but these have been written so that you may believe that Jesus is the Christ, the Son of God, and that by believing you may have life in His name.


The concept of a bodily resurrection is a hard thing for some people to accept, but since there were many, many, witnesses, I say let the evidence speak for itself. There are so many things in this world we accept by faith, why not do the reasonable thing and accept the witness found in the Bible? Oh, I didn't tell you... the tire that passed my father's truck was HIS FRONT TIRE;He saw that immediately and VERY SLOWLY APPLIED THE BRAKES. I didn't argue with him, I just accepted it as fact. Good example to follow.
Email ThisBlogThis!Share to TwitterShare to FacebookShare to Pinterest
Newer Post Older Post Home