No words can express the beauty 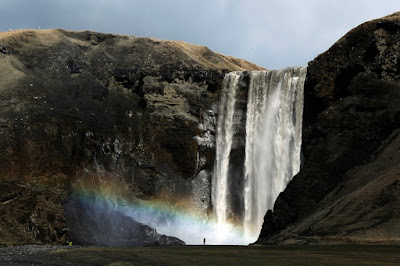 The rainbow is a promise of God. Specifically, that he would not destroy the Earth by means of a floor. It is a beautiful thing, showing the color within the light that we see every day. Most of the time when I see a rainbow it is on the horizon, but once in awhile it is close by and the closer it gets the more beautiful it becomes. How could a rainbow be any better? Why, if you are in it of course. So the concept of "better" came to mind and of course this passage from the book of Hebrews.
Heb 8:1-13 (WEB)
1) Now in the things which we are saying, the main point is this. We have such a high priest, who sat down on the right hand of the throne of the Majesty in the heavens,
2) a servant of the sanctuary, and of the true tabernacle, which the Lord pitched, not man.
3) For every high priest is appointed to offer both gifts and sacrifices. Therefore it is necessary that this high priest also have something to offer.
4) For if he were on earth, he would not be a priest at all, seeing there are priests who offer the gifts according to the law;
5) who serve a copy and shadow of the heavenly things, even as Moses was warned by God when he was about to make the tabernacle, for he said, “See, you shall make everything according to the pattern that was shown to you on the mountain.”
6) But now he has obtained a more excellent ministry, by so much as he is also the mediator of a better covenant, which on better promises has been given as law.
7) For if that first covenant had been faultless, then no place would have been sought for a second.
8) For finding fault with them, he said, “Behold, the days come,” says the Lord, “that I will make a new covenant with the house of Israel and with the house of Judah;
9) not according to the covenant that I made with their fathers, in the day that I took them by the hand to lead them out of the land of Egypt; for they didn’t continue in my covenant, and I disregarded them,” says the Lord.
10) “For this is the covenant that I will make with the house of Israel. After those days,” says the Lord; “I will put my laws into their mind, I will also write them on their heart. I will be their God, and they will be my people.
11) They will not teach every man his fellow citizen, and every man his brother, saying, ‘Know the Lord,’ for all will know me, from their least to their greatest.
12) For I will be merciful to their unrighteousness. I will remember their sins and lawless deeds no more.”
13) In that he says, “A new covenant,” he has made the first old. But that which is becoming old and grows aged is near to vanishing away.

The relationship God had with Israel was a very special one; He gave them laws, watched over them and guided them for literally hundreds of years. So, what could be better? The answer is to go beyond the concept of LAW entirely; to create a new way of knowing God... from the heart. the LAW was superseded by Grace, just as the rules of childhood are replaced by the understanding of an adult. After all, isn't it better to know what to do rather than be told what to do. Grace is like being IN A RAINBOW; the promises of God and you become one. When the human heart is colored by the promises of the living God, no words can express the beauty of it.
Email ThisBlogThis!Share to TwitterShare to FacebookShare to Pinterest
Newer Post Older Post Home