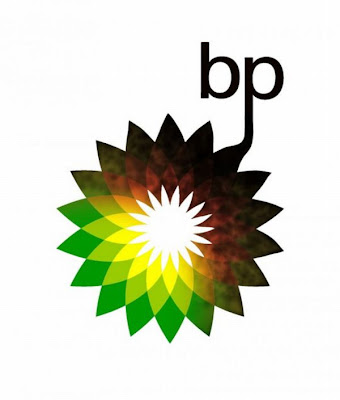 I saw this interesting picture on the net recently. Someone had modified the B.P. logo to make a portion of it black. To many people, B.P. will be remembered in a bad light (a pitch black oil one) because of the accident in the gulf. That is the way it is sometimes, you live a certain way and then something new transpires in your life, but people can only think of the old you. So it was for the apostle Paul; he had been a zealous Jew, even to the point of persecuting Christians in way away cities. But God had a different plan for him as this text from the book of Acts shows.
Acts 9:10-22 (WEB)
10) Now there was a certain disciple at Damascus named Ananias. The Lord said to him in a vision, “Ananias!” He said, “Behold, it’s me, Lord.”
11) The Lord said to him, “Arise, and go to the street which is called Straight, and inquire in the house of Judah for one named Saul, a man of Tarsus. For behold, he is praying,
12) and in a vision he has seen a man named Ananias coming in, and laying his hands on him, that he might receive his sight.”
13) But Ananias answered, “Lord, I have heard from many about this man, how much evil he did to your saints at Jerusalem.
14) Here he has authority from the chief priests to bind all who call on your name.”
15) But the Lord said to him, “Go your way, for he is my chosen vessel to bear my name before the nations and kings, and the children of Israel.
16) For I will show him how many things he must suffer for my name’s sake.”
17) Ananias departed, and entered into the house. Laying his hands on him, he said, “Brother Saul, the Lord, who appeared to you on the road by which you came, has sent me, that you may receive your sight, and be filled with the Holy Spirit.”
18) Immediately something like scales fell from his eyes, and he received his sight. He arose and was baptized.
19) He took food and was strengthened. Saul stayed several days with the disciples who were at Damascus.
20) Immediately in the synagogues he proclaimed the Christ, that he is the Son of God.
21) All who heard him were amazed, and said, “Isn’t this he who in Jerusalem made havoc of those who called on this name? And he had come here intending to bring them bound before the chief priests!”
22) But Saul increased more in strength, and confounded the Jews who lived at Damascus, proving that this is the Christ.
(Acts 9:10-22, WEB)

There is an old French saying: Man proposes, God DISPOSES! Things will change in this life and sometimes people too. In Paul's case it was for the good and to our benefit. As far as B.P. goes, I hope they clean up their act and the gulf as well. Right now they have one very big black mark on their reputation (and their logo). I wish them success in their efforts, a lot of people's livelihoods depend on it and the lives of countless animals as well.
Email ThisBlogThis!Share to TwitterShare to FacebookShare to Pinterest
Newer Post Older Post Home