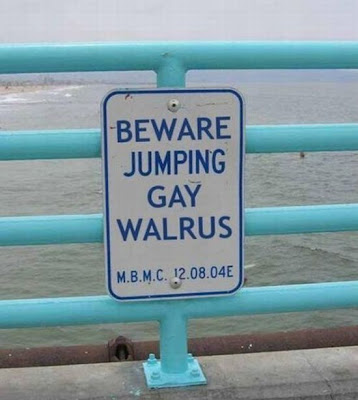 A jumping gay walrus? Is someone trying to be funny, or what? I have seen walruses and I can't imagine them jumping. Now, what exactly is a gay walrus? Is it a happy animal or one that is homosexual or is it something else? Sometimes trying to understand what others mean by what they say is difficult to say the least. Here is a series of the same sort of problem: misunderstanding.
Matthew 16:1-23 (WEB)
1) The Pharisees and Sadducees came, and testing him, asked him to show them a sign from heaven.
2) But he answered them, “When it is evening, you say, ‘It will be fair weather, for the sky is red.’
3) In the morning, ‘It will be foul weather today, for the sky is red and threatening.’ Hypocrites! You know how to discern the appearance of the sky, but you can’t discern the signs of the times!
4) An evil and adulterous generation seeks after a sign, and there will be no sign given to it, except the sign of the prophet Jonah.” He left them, and departed.
5) The disciples came to the other side and had forgotten to take bread.
6) Jesus said to them, “Take heed and beware of the yeast of the Pharisees and Sadducees.”
7) They reasoned among themselves, saying, “We brought no bread.”
8) Jesus, perceiving it, said, “Why do you reason among yourselves, you of little faith, ‘because you have brought no bread?’
9) Don’t you yet perceive, neither remember the five loaves for the five thousand, and how many baskets you took up?
10) Nor the seven loaves for the four thousand, and how many baskets you took up?
11) How is it that you don’t perceive that I didn’t speak to you concerning bread? But beware of the yeast of the Pharisees and Sadducees.”
12) Then they understood that he didn’t tell them to beware of the yeast of bread, but of the teaching of the Pharisees and Sadducees.
13) Now when Jesus came into the parts of Caesarea Philippi, he asked his disciples, saying, “Who do men say that I, the Son of Man, am?”
14) They said, “Some say John the Baptizer, some, Elijah, and others, Jeremiah, or one of the prophets.”
15) He said to them, “But who do you say that I am?”
16) Simon Peter answered, “You are the Christ, the Son of the living God.”
17) Jesus answered him, “Blessed are you, Simon Bar Jonah, for flesh and blood has not revealed this to you, but my Father who is in heaven.
18) I also tell you that you are Peter, and on this rock I will build my assembly, and the gates of Hades will not prevail against it.
19) I will give to you the keys of the Kingdom of Heaven, and whatever you bind on earth will have been bound in heaven; and whatever you release on earth will have been released in heaven.”
20) Then he commanded the disciples that they should tell no one that he was Jesus the Christ.
21) From that time, Jesus began to show his disciples that he must go to Jerusalem and suffer many things from the elders, chief priests, and scribes, and be killed, and the third day be raised up.
22) Peter took him aside, and began to rebuke him, saying, “Far be it from you, Lord! This will never be done to you.”
23) But he turned, and said to Peter, “Get behind me, Satan! You are a stumbling block to me, for you are not setting your mind on the things of God, but on the things of men.”
(Matthew 16:1-23, WEB)

The Pharisees and the Sadducee's didn't understand Jesus and most of the time Jesus' disciples didn't either. Peter seemed to for awhile, but then Jesus had to correct him. Life is like that; full of misunderstandings and miscommunication. Sometimes our misunderstandings are humorous like the sign and sometimes serious, but they happen. So, I guess we all have to try harder to get it right; especially when it comes to the serious things like really listening to the words of Jesus. Only one thing left to say... "Does anyone know where this sign is... I really want to see those walruses!!!
Email ThisBlogThis!Share to TwitterShare to FacebookShare to Pinterest
Newer Post Older Post Home