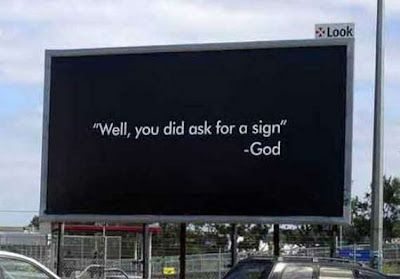 Interesting: a sign from God. Actually, there are billboards all over the country with messages like these. I first encountered them at cracker barrel. Some enterprising person had the idea of taking pieces of slate, painting them blue with a few clouds thrown in and putting a message from God on it. Bought several, keep them in my study and look at them every so often. I find its good for me and always puts me in a spiritual mood. But, what if God actually did give you a sign, would you listen or understand. He has and some will and some will not get it. Here is one.
John 2:13-22 (WEB)
13) The Passover of the Jews was at hand, and Jesus went up to Jerusalem.
14) He found in the temple those who sold oxen, sheep, and doves, and the changers of money sitting.
15) He made a whip of cords, and threw all out of the temple, both the sheep and the oxen; and he poured out the changers’ money, and overthrew their tables.
16) To those who sold the doves, he said, “Take these things out of here! Don’t make my Father’s house a marketplace!”
17) His disciples remembered that it was written, “Zeal for your house will eat me up.”
18) The Jews therefore answered him, “What sign do you show us, seeing that you do these things?”
19) Jesus answered them, “Destroy this temple, and in three days I will raise it up.”
20) The Jews therefore said, “It took forty-six years to build this temple! Will you raise it up in three days?”
21) But he spoke of the temple of his body.
22) When therefore he was raised from the dead, his disciples remembered that he said this, and they believed the Scripture, and the word which Jesus had said.
(John 2:13-22, WEB)

For some, Jesus scourging the temple was quite a radical thing to do. So, the Jews questioned his authority (in the guise of sign-giving). Jesus pointed to his own temple resurrection but the Jews just didn't get it. I can't help but wonder if they ever could get it, even if Jesus spoke even more plainly. Maybe even as plain as putting his message in simple terms might have helped, I don't know. Perhaps a black and white sign might have worked.... naw!
Email ThisBlogThis!Share to TwitterShare to FacebookShare to Pinterest
Newer Post Older Post Home