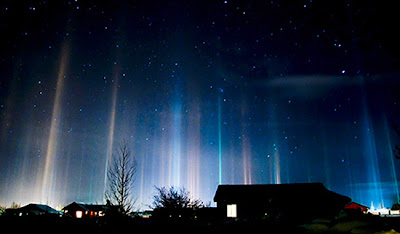 An unusual "Northern Lights" display; they don't normally ascend vertically!!!  Take away the housing and it looks like an introduction for an old movie.  In other words... let the show begin...  While thinking about this, I thought of this passage from the book of 1st Peter.
1 Peter 4:1-11 (WEB)
1) Forasmuch then as Christ suffered for us in the flesh, arm yourselves also with the same mind; for he who has suffered in the flesh has ceased from sin;
2) that you no longer should live the rest of your time in the flesh for the lusts of men, but for the will of God.
3) For we have spent enough of our past time doing the desire of the Gentiles, and having walked in lewdness, lusts, drunken binges, orgies, carousings, and abominable idolatries.
4) They think it is strange that you don’t run with them into the same excess of riot, blaspheming:
5) who will give account to him who is ready to judge the living and the dead.
6) For to this end the Good News was preached even to the dead, that they might be judged indeed as men in the flesh, but live as to God in the spirit.
7) But the end of all things is near. Therefore be of sound mind, self-controlled, and sober in prayer.
8) And above all things be earnest in your love among yourselves, for love covers a multitude of sins.
9) Be hospitable to one another without grumbling.
10) As each has received a gift, employ it in serving one another, as good managers of the grace of God in its various forms.
11) If anyone speaks, let it be as it were the very words of God. If anyone serves, let it be as of the strength which God supplies, that in all things God may be glorified through Jesus Christ, to whom belong the glory and the dominion forever and ever. Amen.
Today, for most of us, practicing our Christian faith is easy compared to what Christians had to endure in the earliest centuries.  It is a rarity for someone in the United States to die for their faith.  Notice a little statement that is casually mentioned: "but the end of all things is near".  This sort of statement is found in several of the New Testament and is a problem for some.  Their problem is... if this is true, then why hasn't the return of Christ happened?  Good question!!!  Consider that God has made everything in the universe and that with HIM a day is as a thousand years and a thousand years as one day.  Imagine that all time is viewed as one of the giant Egyptian pyramids and that the time of the end is as a postage stamp at the top.  The end times would appear insignificant and fleeting; a mere wisp of time.  Who says we must consider the end of all things from our perspective?  Why not God's?  Also, whether God comes today, tomorrow, or in 50 or 90 years, we are but a heartbeat away from meeting our maker.  So, let the show begin; sooner or later (in God's own time) judgment day will come!!!!!!
Email ThisBlogThis!Share to TwitterShare to FacebookShare to Pinterest
Newer Post Older Post Home