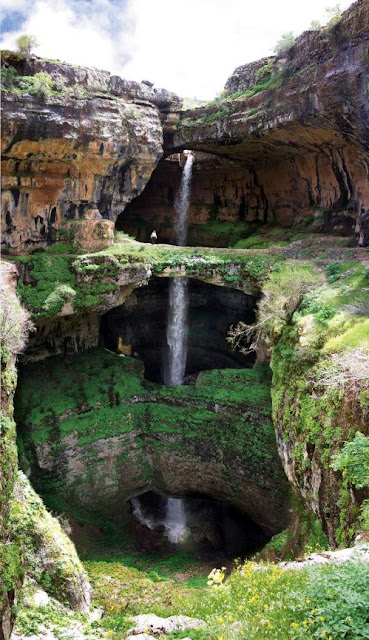 I was intrigued by this today when I saw it on the net.  This is the very first time I have ever seen a waterfall even partially enclosed in rock.  Very beautiful indeed!!!  It reminded me of our country; how that even for all the rancor over politics and economics, there is still much that is very good about The United States Of America.  Many of us still believe in freedom and liberty and just as the founding fathers fought to establish our republic, so we should consider ourselves "Defending Fathers" (as Herman Cain would say).  It would seem that those who think this way are few and far between, but I think there are probably a lot more than anyone could imagine.  All this reminds me of a passage in Paul's letter to the Romans...
Romans 11:1-6 (WEB)
1) I ask then, did God reject his people? May it never be! For I also am an Israelite, a descendant of Abraham, of the tribe of Benjamin.
2) God didn’t reject his people, which he foreknew. Or don’t you know what the Scripture says about Elijah? How he pleads with God against Israel:
3) “Lord, they have killed your prophets, they have broken down your altars; and I am left alone, and they seek my life.”
4) But how does God answer him? “I have reserved for myself seven thousand men, who have not bowed the knee to Baal.”
5) Even so then at this present time also there is a remnant according to the election of grace.
6) And if by grace, then it is no longer of works; otherwise grace is no longer grace. But if it is of works, it is no longer grace; otherwise work is no longer work.
In all the world, who knows how many people are the genuine "true believers"; those who have kept a pure and unadulterated conscience before the Almighty?  At times, we may ask a question like Elijah, but have faith, God is working everything out.  It may seem like our country as well as Christianity is doomed to extinction, but if we only knew what God is really doing, I believe we would be amazed!!!  Today is the first one where I saw a really unusual waterfall and I wonder what tomorrow will bring?  Can God surprise me again tomorrow?  I think we all know the answer to that one!!!!
Email ThisBlogThis!Share to TwitterShare to FacebookShare to Pinterest
Newer Post Older Post Home