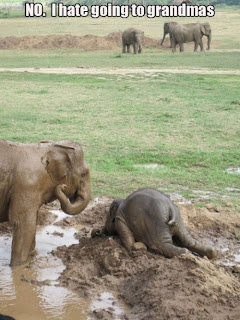 Its that time of year again; family get-togethers, celebrations and of course, Christmas.  Thanksgiving and Christmas; two holidays that are MANDATORY for family.  It has always seemed odd to me that you get to pick your friends, but NOT YOUR FAMILY!!!   Friends are just that... friends; but family... well, face it, some of them may be less than wonderful.  Some may even be much worse than bad.  But, you get what you get and try to show solidarity with them all.  That is just the way it is because after all, they are FAMILY!!!  When I think of this time of year, naturally I think of passages such as the following...
WEB: Luke Chapter 2

[1] Now it happened in those days, that a decree went out from Caesar Augustus that all the world should be enrolled. [2] This was the first enrollment made when Quirinius was governor of Syria. [3] All went to enroll themselves, everyone to his own city. [4] Joseph also went up from Galilee, out of the city of Nazareth, into Judea, to the city of David, which is called Bethlehem, because he was of the house and family of David; [5] to enroll himself with Mary, who was pledged to be married to him as wife, being pregnant.

[6] It happened, while they were there, that the day had come that she should give birth. [7] She brought forth her firstborn son, and she wrapped him in bands of cloth, and laid him in a feeding trough, because there was no room for them in the inn. [8] There were shepherds in the same country staying in the field, and keeping watch by night over their flock. [9] Behold, an angel of the Lord stood by them, and the glory of the Lord shone around them, and they were terrified. [10] The angel said to them, “Don’t be afraid, for behold, I bring you good news of great joy which will be to all the people. [11] For there is born to you, this day, in the city of David, a Savior, who is Christ the Lord. [12] This is the sign to you: you will find a baby wrapped in strips of cloth, lying in a feeding trough.” [13] Suddenly, there was with the angel a multitude of the heavenly army praising God, and saying,


[15] It happened, when the angels went away from them into the sky, that the shepherds said one to another, “Let’s go to Bethlehem, now, and see this thing that has happened, which the Lord has made known to us.” [16] They came with haste, and found both Mary and Joseph, and the baby was lying in the feeding trough. [17] When they saw it, they publicized widely the saying which was spoken to them about this child. [18] All who heard it wondered at the things which were spoken to them by the shepherds. [19] But Mary kept all these sayings, pondering them in her heart. [20] The shepherds returned, glorifying and praising God for all the things that they had heard and seen, just as it was told them.

[21] When eight days were fulfilled for the circumcision of the child, his name was called Jesus, which was given by the angel before he was conceived in the womb.

[25] Behold, there was a man in Jerusalem whose name was Simeon. This man was righteous and devout, looking for the consolation of Israel, and the Holy Spirit was on him. [26] It had been revealed to him by the Holy Spirit that he should not see death before he had seen the Lord’s Christ. [27] He came in the Spirit into the temple. When the parents brought in the child, Jesus, that they might do concerning him according to the custom of the law, [28] then he received him into his arms, and blessed God, and said,

[29] “Now you are releasing your servant, Master,
according to your word, in peace;


[30] for my eyes have seen your salvation,
[31] which you have prepared before the face of all peoples;


[32] a light for revelation to the nations,
and the glory of your people Israel.”


[33] Joseph and his mother were marveling at the things which were spoken concerning him, [34] and Simeon blessed them, and said to Mary, his mother, “Behold, this child is set for the falling and the rising of many in Israel, and for a sign which is spoken against. [35] Yes, a sword will pierce through your own soul, that the thoughts of many hearts may be revealed.”
We attend family celebrations, but Joseph and Mary were obeying a Roman edict when their first son was born.  But, this was not a normal situation; angels in heaven rejoiced, shepherds marveled and prophetic pronouncements were made about their new child.  How the parents must have wondered about the future of their newborn?  They must have asked themselves:"Why Us"?  I really don't know the answer to that question, except to say we don't get to pick our relations, God does.  So, in this holiday season, be happy with the family God has given you; meet with them...BE HAPPY!!!  Who knows, you may just discover something unexpected, something wonderful, about someone you have known all your life.  Surprise!!!
Email ThisBlogThis!Share to TwitterShare to FacebookShare to Pinterest
Newer Post Older Post Home