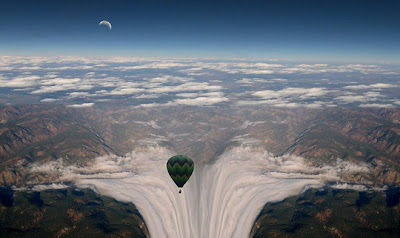 Just a picture of a balloon over a falls, but wait, is it going up or in the other direction?  I can't tell from the picture; can you?  Question: Have you ever felt like this?  Your life is in turmoil, you are totally confused and can't tell up from up or down.  What do you do next, where do you go?  Forgotten?  Well, here is a portion of the Scripture to remind you...
WEB: Mark Chapter 14

[27] Jesus said to them, "“All of you will be made to stumble because of me tonight, for it is written, ‘I will strike the shepherd, and the sheep will be scattered.’ [28] However, after I am raised up, I will go before you into Galilee.”"

[30] Jesus said to him, "“Most certainly I tell you, that you today, even this night, before the rooster crows twice, you will deny me three times.”"

[32] They came to a place which was named Gethsemane. He said to his disciples, "“Sit here, while I pray.”" [33] He took with him Peter, James, and John, and began to be greatly troubled and distressed. [34] He said to them, "“My soul is exceedingly sorrowful, even to death. Stay here, and watch.”"

[35] He went forward a little, and fell on the ground, and prayed that, if it were possible, the hour might pass away from him. [36] He said, "“Abba, Father, all things are possible to you. Please remove this cup from me. However, not what I desire, but what you desire.”"

[37] He came and found them sleeping, and said to Peter, "“Simon, are you sleeping? Couldn’t you watch one hour? [38] Watch and pray, that you may not enter into temptation. The spirit indeed is willing, but the flesh is weak.”"

[39] Again he went away, and prayed, saying the same words. [40] Again he returned, and found them sleeping, for their eyes were very heavy, and they didn’t know what to answer him. [41] He came the third time, and said to them, "“Sleep on now, and take your rest. It is enough. The hour has come. Behold, the Son of Man is betrayed into the hands of sinners. [42] Arise, let us be going. Behold, he who betrays me is at hand.”"

[43] Immediately, while he was still speaking, Judas, one of the twelve, came—and with him a multitude with swords and clubs, from the chief priests, the scribes, and the elders. [44] Now he who betrayed him had given them a sign, saying, “Whomever I will kiss, that is he. Seize him, and lead him away safely.” [45] When he had come, immediately he came to him, and said, “Rabbi! Rabbi!” and kissed him. [46] They laid their hands on him, and seized him. [47] But a certain one of those who stood by drew his sword, and struck the servant of the high priest, and cut off his ear.

[48] Jesus answered them, "“Have you come out, as against a robber, with swords and clubs to seize me? [49] I was daily with you in the temple teaching, and you didn’t arrest me. But this is so that the Scriptures might be fulfilled.”"

[50] They all left him, and fled.
Jesus had led his disciples for about three years; he was their undisputed leader and deservedly so.  They all go to Gethsemane to pray, but, for some reason the disciples keep falling asleep.  Judas and company enter the picture; the disciples flee.  History, just as Jesus had foretold.  History has been an interest of mine for several decades now and will continue to be for the foreseeable future!  Because of my interest in the Bible, ancient history seems of more interesting than current events, but frankly I like both.  I am not really sure why I find it interesting; perhaps it has something to do with predicting human behavior based on past examples, who knows?  Yet Jesus knew what his followers would do, BEFORE THEY DID IT!!!  They didn't know up from down, just like the balloon in the picture, but Jesus did.  Now we are getting somewhere... As I think about it, the Bible teaches about history in a different way... HIS story.  God saw the pitiful condition of man in his sin and worked out a way to make things right; through HIS son, History... got to love it!!!  Once you know it (or rather how God works) there is a overwhelming fascination in the simplicity of his complexity. Life isn't full of uncertainty, its comprised of serendipity!!!  Up, down, sideways or something else; it really doesn't matter... just as long as the creator of the universe is right there with you.  And that is good enough for me!!!
Email ThisBlogThis!Share to TwitterShare to FacebookShare to Pinterest
Newer Post Older Post Home