From Gary... Too close to home for comfort 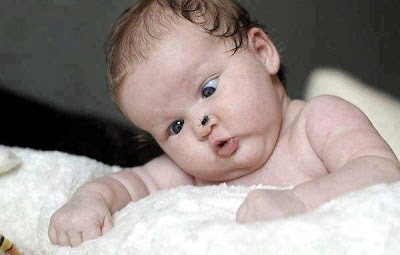 Have you ever tried to understand something so hard that your effort actually prevented you from seeing the answer? Well, this picture is an example of just such a thing!  Its funny because you just know that it is genuine, due to the fact that this child is just too young to be acting.  The older I get, the more I like humor and have grown to appreciate  how Jesus approached things.  Just consider this passage from the book of Matthew for instance...


21  Jesus answered them, “I did one work, and you all marvel because of it.   22  Moses has given you circumcision (not that it is of Moses, but of the fathers), and on the Sabbath you circumcise a boy.   23  If a boy receives circumcision on the Sabbath, that the law of Moses may not be broken, are you angry with me, because I made a man completely healthy on the Sabbath?  24  Don’t judge according to appearance, but judge righteous judgment.”

41  “A certain lender had two debtors. The one owed five hundred denarii, and the other fifty.   42  When they couldn’t pay, he forgave them both. Which of them therefore will love him most?”

He said to him, “You have judged correctly.”


54  He said to the multitudes also, “When you see a cloud rising from the west, immediately you say, ‘A shower is coming,’ and so it happens.   55  When a south wind blows, you say, ‘There will be a scorching heat,’ and it happens.   56  You hypocrites! You know how to interpret the appearance of the earth and the sky, but how is it that you don’t interpret this time?   57  Why don’t you judge for yourselves what is right?


Jesus takes a serious subject (judging your brother) and makes it ridiculous.  Imagine a person with a beam stuck in his eye, trying to remove a speck from someone else's?  Many, many people misapply Matthew  7:1 to mean that we should never judge anything (or anybody) at all.  They are very wrong.  Consider the other passages besides Matthew above and you will see that there is nothing wrong in making a judgment- you just need to do it with spiritual insight.  Problems arise because of sinful attitudes and actions on the part of the person making the determination.  However, sin should be confronted in the church and discipline applied when necessary...

1 Corinthians, Chapter 5
6  Your boasting is not good. Don’t you know that a little yeast leavens the whole lump?  7 Purge out the old yeast, that you may be a new lump, even as you are unleavened. For indeed Christ, our Passover, has been sacrificed in our place.  8 Therefore let us keep the feast, not with old yeast, neither with the yeast of malice and wickedness, but with the unleavened bread of sincerity and truth.  9 I wrote to you in my letter to have no company with sexual sinners;  10 yet not at all meaning with the sexual sinners of this world, or with the covetous and extortionists, or with idolaters; for then you would have to leave the world. 11 But as it is, I wrote to you not to associate with anyone who is called a brother who is a sexual sinner, or covetous, or an idolater, or a slanderer, or a drunkard, or an extortionist. Don’t even eat with such a person.  12 For what have I to do with also judging those who are outside? Don’t you judge those who are within?  13 But those who are outside, God judges. “Put away the wicked man from among yourselves.”

The Corinthians made the right decision about the erring brother and later on Paul praises them for it (2 Corinthians 2:1-11).  I admit that they had a bit of an advantage because they had an actual apostle guiding them, but spirituality exists today and we too can judge whether or not to discipline our erring brother. For those outside the church, God judges (verse 13).  Our focus should be on presenting truth and not on being judgmental about that truth.  Remember Matthew 7 and think: attitude, attitude, attitude!!!  And, by the way, I just hate it when a fly gets on my nose and I can't get it; it hurts when I have to cross my eyes!!!
Email ThisBlogThis!Share to TwitterShare to FacebookShare to Pinterest
Newer Post Older Post Home