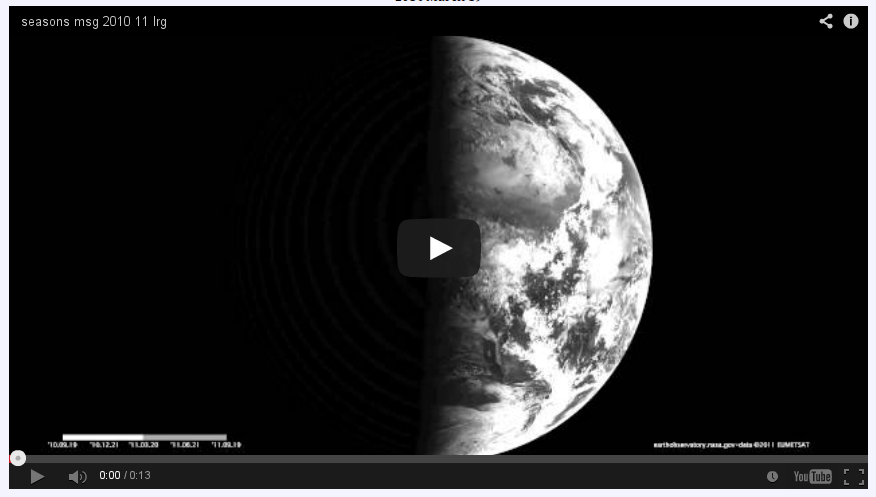 Somehow, it is strange the way things seem to just come together when I write this blog.  First, there is the advertisement for the new movie called Noah. Then, we just happen to be studying the book of Second Peter at church and finally, there is today's picture on nasa.gov.. Well, I haven't seen the movie "Noah", but I hear that it differs from the Biblical account, but the promo certainly looks interesting. And the book of Second Peter is interesting for a variety of reasons, foremost among them is that I just haven't studied it in a long time. And then there is today's NASA picture about the equinox. When I viewed the video and saw the shifting terminator, dividing day and night, I was reminded that this Earth has been around a long, long time, but will not be here forever.  Putting all this together with the passages listed below, I thought...

Genesis, Chapter 8
20  Noah built an altar to Yahweh, and took of every clean animal, and of every clean bird, and offered burnt offerings on the altar.  21 Yahweh smelled the pleasant aroma. Yahweh said in his heart, “I will not again curse the ground any more for man’s sake because the imagination of man’s heart is evil from his youth; neither will I ever again strike every living thing, as I have done.  22 While the earth remains, seed time and harvest, and cold and heat, and summer and winter, and day and night will not cease.”
2nd Peter, Chapter 3
1 This is now, beloved, the second letter that I have written to you; and in both of them I stir up your sincere mind by reminding you;  2 that you should remember the words which were spoken before by the holy prophets, and the commandments of us, the apostles of the Lord and Savior:  3 knowing this first, that in the last days mockers will come, walking after their own lusts,  4 and saying, “Where is the promise of his coming? For, from the day that the fathers fell asleep, all things continue as they were from the beginning of the creation.”  5 For this they willfully forget, that there were heavens from of old, and an earth formed out of water and amid water, by the word of God;  6 by which means the world that then was, being overflowed with water, perished.  7 But the heavens that now are, and the earth, by the same word have been stored up for fire, being reserved against the day of judgment and destruction of ungodly men.  8 But don’t forget this one thing, beloved, that one day is with the Lord as a thousand years, and a thousand years as one day.  9 The Lord is not slow concerning his promise, as some count slowness; but is patient with us, not wishing that any should perish, but that all should come to repentance.  10 But the day of the Lord will come as a thief in the night; in which the heavens will pass away with a great noise, and the elements will be dissolved with fervent heat, and the earth and the works that are in it will be burned up.  11 Therefore since all these things will be destroyed like this, what kind of people ought you to be in holy living and godliness,  12 looking for and earnestly desiring the coming of the day of God, which will cause the burning heavens to be dissolved, and the elements will melt with fervent heat?  13 But, according to his promise, we look for new heavens and a new earth, in which righteousness dwells.
Just because we have not seen the end of all things, does NOT MEAN THAT IT ISN'T COMING!!!  Scoffers will belittle God and his word. Disbelievers will do what they have to do, but as for me- verse 13 above is God's word on the subject and that settles that!!!!

Believe or don't believe, you have the right to choose, but remember, God delivered Noah because he OBEYED HIM. Everyone else made the WRONG CHOICE and did not survive!!! I pray that you will follow in the footsteps of NOAH and obey when God's word instructs you to do something!!!  Now is the time, today is the day to do something with your life- and Gary- THIS MEANS YOU AS WELL!!!!
Email ThisBlogThis!Share to TwitterShare to FacebookShare to Pinterest
Newer Post Older Post Home