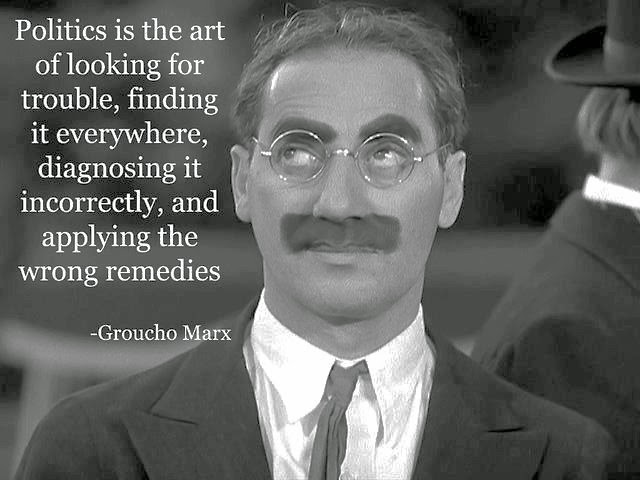 If your alive in America, you can't help but notice what is happening in politics.  To me at least, it seems like the current situation is changing way too rapidly- for the worse. So, I find what enjoyment I can about politics, do what I can about it and get on with my life.  I like Groucho Marx, because of his satiric wit and his impeccable comedic timing.  Some of my earliest memories are of his "You bet your life" on black and white TV.  The following is an except from a Wikipedia article I recently read...

From Wikipedia...
Groucho Marx made 26 movies, 13 of them with his brothers Chico and Harpo.[7] Marx developed a routine as a wisecracking hustler with a distinctive chicken-walking lope, an exaggerated greasepaint mustache and eyebrows, and an ever-present cigar, improvising insults to stuffy dowagers (often played by Margaret Dumont) and anyone else who stood in his way. As the Marx Brothers, he and his brothers starred in a series of popular stage shows and movies.
Their first movie was a silent film made in 1921 that was never released,[7] and is believed to have been destroyed at the time. A decade later, the team made some of their Broadway hits into movies, including The Cocoanuts and Animal Crackers.[7] Other successful films were Monkey Business, Horse Feathers, Duck Soup, and A Night at the Opera.[7] One quip from Marx concerned his response to Sam Wood, the director of A Night at the Opera. Furious with the Marx Brothers' ad-libs and antics on the set, Wood yelled in disgust: "You can't make an actor out of clay." Groucho responded, "Nor a director out of Wood."[8]
Marx worked as a radio comedian and show host. One of his earliest stints was in a short-lived series in 1932, Flywheel, Shyster, and Flywheel, costarring Chico. Most of the scripts and discs were thought to have been destroyed, but all but one of the scripts were found in 1988 in the Library of Congress. In 1947, Marx was chosen to host a radio quiz program, You Bet Your Life, broadcast by ABC and then CBS, before moving over to NBC radio and television in 1950. Filmed before a live audience, the television show consisted of Marx interviewing the contestants and ad libbing jokes, before playing a brief quiz. The show was responsible for the phrases "Say the secret woid [word] and divide $100" (that is, each contestant would get $50); and "Who's buried in Grant's Tomb?" or "What color is the White House?" (asked when Marx felt sorry for a contestant who had not won anything). It ran for eleven years on television.
Groucho was the subject of an urban legend about a supposed response to a contestant who had nine children which supposedly brought down the house. In response to Marx asking in disbelief why she had so many children, the contestant replied, "I love my husband." To this, Marx responded, "I love my cigar, too, but I take it out of my mouth once in a while." Groucho often asserted in interviews that this exchange never took place, but it remains one of the most often quoted "Groucho-isms" nonetheless.[9]
Throughout his career he introduced a number of memorable songs in films, including "Hooray for Captain Spaulding" and "Hello, I Must Be Going", in Animal Crackers, "Whatever It Is, I'm Against It", "Everyone Says I Love You" and "Lydia the Tattooed Lady". Frank Sinatra, who once quipped that the only thing he could do better than Marx was sing, made a film with Marx and Jane Russell in 1951 entitled Double Dynamite.

Comedy aside, the Bible has commentary concerning the Christian and government.  In the Old Testament, many of the prophets confronted kings, but in the New Testament we are told the following...

Romans, Chapter 13
1 Let every soul be in subjection to the higher authorities, for there is no authority except from God, and those who exist are ordained by God.  2 Therefore he who resists the authority, withstands the ordinance of God; and those who withstand will receive to themselves judgment.  3 For rulers are not a terror to the good work, but to the evil. Do you desire to have no fear of the authority? Do that which is good, and you will have praise from the same,  4 for he is a servant of God to you for good. But if you do that which is evil, be afraid, for he doesn’t bear the sword in vain; for he is a servant of God, an avenger for wrath to him who does evil.  5 Therefore you need to be in subjection, not only because of the wrath, but also for conscience’ sake.  6 For this reason you also pay taxes, for they are servants of God’s service, attending continually on this very thing. 7 Give therefore to everyone what you owe: taxes to whom taxes are due; customs to whom customs; respect to whom respect; honor to whom honor.  8 Owe no one anything, except to love one another; for he who loves his neighbor has fulfilled the law.
And Jesus said...

Matthew, Chapter 22
15  Then the Pharisees went and took counsel how they might entrap him in his talk. 16 They sent their disciples to him, along with the Herodians, saying, “Teacher, we know that you are honest, and teach the way of God in truth, no matter whom you teach, for you aren’t partial to anyone.  17 Tell us therefore, what do you think? Is it lawful to pay taxes to Caesar, or not?”   18  But Jesus perceived their wickedness, and said, “Why do you test me, you hypocrites?   19  Show me the tax money.” They brought to him a denarius.   20  He asked them, “Whose is this image and inscription?”   21  They said to him, “Caesar’s.”

Now, all this does not mean that we are to keep the truth to ourselves, for even Paul was sent to Rome by God and proclaimed the Gospel there. So, laugh about our current state of affairs when you can, change what you can legally change and leave all the rest up to God.  Oh, yes- and if you get a chance...  listen to this song  ("Whatever It Is, I'm Against It") from Groucho Marx; you might get a laugh out of it!!!