From Gary... A little beauty for everyone 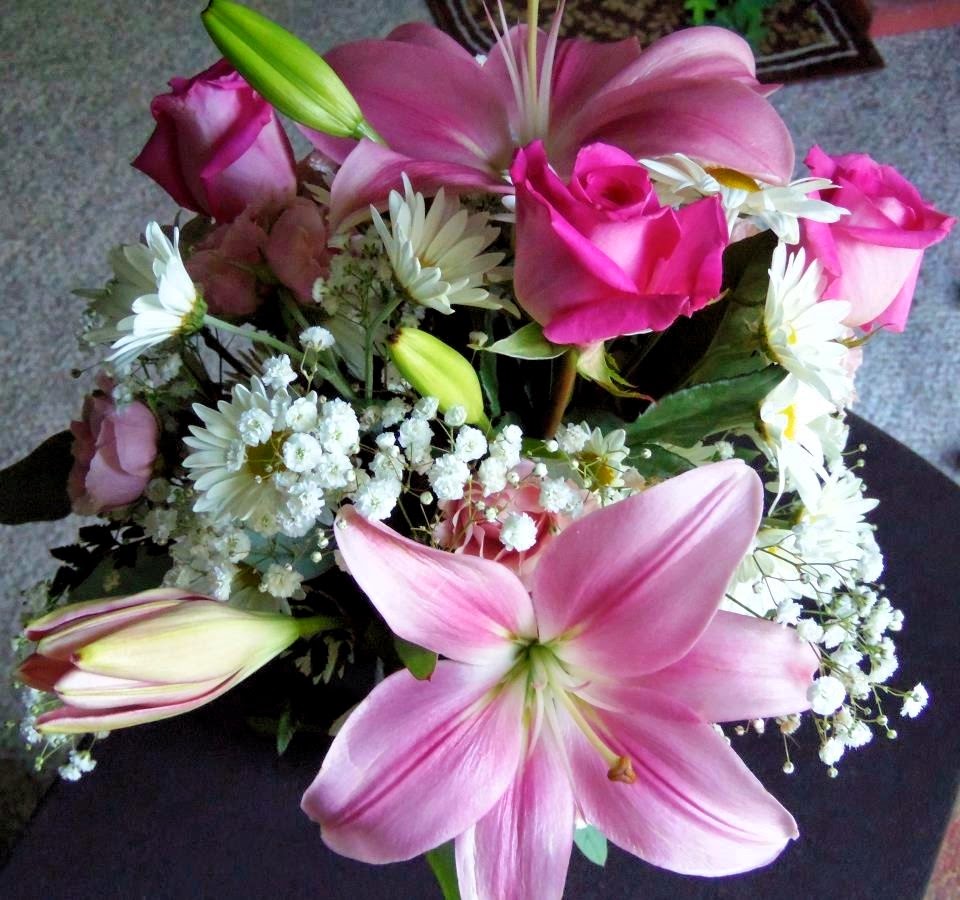 Today, I chose this picture just for the fun of it- because the beauty of this arrangement (and its variety of flowers) just seemed to "work" for me.  Frankly, I don't know much about flowers (except Rose's- naturally), so I asked my wife, Linda and she told me that there are Rose's, Lillies, Baby's Breath and Daisies in the bouquet above.  Singularly, each flower would be interesting; but together- they have a vitality to them that inspires the heart and brings warmth to the soul.  I guess that is why they are given as gifts so often.  And almost always they are received as a bit of "Good News", when they arrive at your door.  Naturally, I thought of the following...

Acts 2:1-38 NASB
(1)  When the day of Pentecost had come, they were all together in one place.
(2)  And suddenly there came from heaven a noise like a violent rushing wind, and it filled the whole house where they were sitting.
(3)  And there appeared to them tongues as of fire distributing themselves, and they rested on each one of them.
(4)  And they were all filled with the Holy Spirit and began to speak with other tongues, as the Spirit was giving them utterance.
(5)  Now there were Jews living in Jerusalem, devout men from every nation under heaven.
(6)  And when this sound occurred, the crowd came together, and were bewildered because each one of them was hearing them speak in his own language.
(7)  They were amazed and astonished, saying, "Why, are not all these who are speaking Galileans?
(8)  "And how is it that we each hear them in our own language to which we were born?
(9)  "Parthians and Medes and Elamites, and residents of Mesopotamia, Judea and Cappadocia, Pontus and Asia,
(10)  Phrygia and Pamphylia, Egypt and the districts of Libya around Cyrene, and visitors from Rome, both Jews and proselytes,
(11)  Cretans and Arabs--we hear them in our own tongues speaking of the mighty deeds of God."
(12)  And they all continued in amazement and great perplexity, saying to one another, "What does this mean?"
(13)  But others were mocking and saying, "They are full of sweet wine."
(14)  But Peter, taking his stand with the eleven, raised his voice and declared to them: "Men of Judea and all you who live in Jerusalem, let this be known to you and give heed to my words.
(15)  "For these men are not drunk, as you suppose, for it is only the third hour of the day;
(16)  but this is what was spoken of through the prophet Joel:
(17)  'AND IT SHALL BE IN THE LAST DAYS,' God says, 'THAT I WILL POUR FORTH OF MY SPIRIT ON ALL MANKIND; AND YOUR SONS AND YOUR DAUGHTERS SHALL PROPHESY, AND YOUR YOUNG MEN SHALL SEE VISIONS, AND YOUR OLD MEN SHALL DREAM DREAMS;
(18)  EVEN ON MY BONDSLAVES, BOTH MEN AND WOMEN, I WILL IN THOSE DAYS POUR FORTH OF MY SPIRIT And they shall prophesy.
(19)  'AND I WILL GRANT WONDERS IN THE SKY ABOVE AND SIGNS ON THE EARTH BELOW, BLOOD, AND FIRE, AND VAPOR OF SMOKE.
(20)  'THE SUN WILL BE TURNED INTO DARKNESS AND THE MOON INTO BLOOD, BEFORE THE GREAT AND GLORIOUS DAY OF THE LORD SHALL COME.
(21)  'AND IT SHALL BE THAT EVERYONE WHO CALLS ON THE NAME OF THE LORD WILL BE SAVED.'
(22)  "Men of Israel, listen to these words: Jesus the Nazarene, a man attested to you by God with miracles and wonders and signs which God performed through Him in your midst, just as you yourselves know--
(23)  this Man, delivered over by the predetermined plan and foreknowledge of God, you nailed to a cross by the hands of godless men and put Him to death.
(24)  "But God raised Him up again, putting an end to the agony of death, since it was impossible for Him to be held in its power.
(25)  "For David says of Him, 'I SAW THE LORD ALWAYS IN MY PRESENCE; FOR HE IS AT MY RIGHT HAND, SO THAT I WILL NOT BE SHAKEN.
(26)  'THEREFORE MY HEART WAS GLAD AND MY TONGUE EXULTED; MOREOVER MY FLESH ALSO WILL LIVE IN HOPE;
(27)  BECAUSE YOU WILL NOT ABANDON MY SOUL TO HADES, NOR ALLOW YOUR HOLY ONE TO UNDERGO DECAY.
(28)  'YOU HAVE MADE KNOWN TO ME THE WAYS OF LIFE; YOU WILL MAKE ME FULL OF GLADNESS WITH YOUR PRESENCE.'
(29)  "Brethren, I may confidently say to you regarding the patriarch David that he both died and was buried, and his tomb is with us to this day.
(30)  "And so, because he was a prophet and knew that GOD HAD SWORN TO HIM WITH AN OATH TO SEAT one OF HIS DESCENDANTS ON HIS THRONE,
(31)  he looked ahead and spoke of the resurrection of the Christ, that HE WAS NEITHER ABANDONED TO HADES, NOR DID His flesh SUFFER DECAY.
(32)  "This Jesus God raised up again, to which we are all witnesses.
(33)  "Therefore having been exalted to the right hand of God, and having received from the Father the promise of the Holy Spirit, He has poured forth this which you both see and hear.
(34)  "For it was not David who ascended into heaven, but he himself says: 'THE LORD SAID TO MY LORD, "SIT AT MY RIGHT HAND,
(35)  UNTIL I MAKE YOUR ENEMIES A FOOTSTOOL FOR YOUR FEET."'
(36)  "Therefore let all the house of Israel know for certain that God has made Him both Lord and Christ--this Jesus whom you crucified."
(37)  Now when they heard this, they were pierced to the heart, and said to Peter and the rest of the apostles, "Brethren, what shall we do?"
(38)  Peter said to them, "Repent, and each of you be baptized in the name of Jesus Christ for the forgiveness of your sins; and you will receive the gift of the Holy Spirit.


Aren't you glad we are not all alike!!!  Each and every race has its own special "something", that sets it apart and adds something to the "whole" of humanity.  We may look different, act differently and speak one (or perhaps, more than one) of thousands of languages, but like the diversity of the bouquet, we are still all "flowers". And if you think about human beings that way; then God WANTS us to be together and make a wonderful arrangement in this world.  And think what "GOOD NEWS" that would be- if we all could just get along!!!  And God recreated the process of creation by sending Jesus to bring us all together spiritually.  And when I think about it, somehow Jesus is there, because the Scripture says...

Song of Solomon 2:1-4 NASB
(1)  "I am the rose of Sharon, The lily of the valleys."
(2)  "Like a lily among the thorns, So is my darling among the maidens."
(3)  "Like an apple tree among the trees of the forest, So is my beloved among the young men. In his shade I took great delight and sat down, And his fruit was sweet to my taste.
(4)  "He has brought me to his banquet hall, And his banner over me is love.


Today, do something nice for someone- and then redirect their thoughts toward Jesus.  Flowers would be nice....
Email ThisBlogThis!Share to TwitterShare to FacebookShare to Pinterest
Newer Post Older Post Home