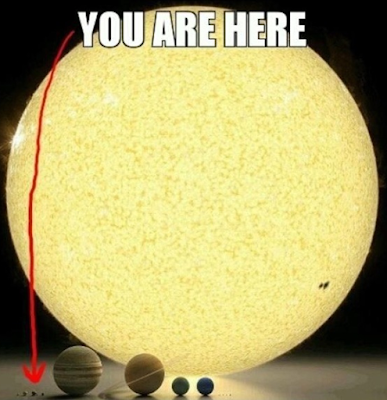 You are here, well, on this planet, anyway.  I can only imagine the picture you would have to use to show the perspective of a human being in this group?  Size matters, but if the scale is too big, it is just TOO BIG; our minds can only comprehend just so much!!! We can understand the difference between ourselves and some of the larger animals, say, an elephant or a whale, but trying to appreciate the relationship to the largest of the dinosaurs is another matter.  Then there is the people comparison thing.  My best friend at Essex Specialty Products (a research firm where I worked) was Ted. He was way over 6 feet- 6'9" in fact and weighted in at about 430 pounds.  Big guy, very big!!! Ted had taught self-defense and had been a private detective, so he was not someone to take lightly and he knew it.  He just gave me a lot of leeway because of our friendship and let me occasionally boss him around a little and get away with it. Which reminds me of another "big guy" from the old testament, and he was NOT SO NICE....

1 Samuel, Chapter 17 (WEB)
2 Saul and the men of Israel were gathered together, and encamped in the valley of Elah, and set the battle in array against the Philistines.  3 The Philistines stood on the mountain on the one side, and Israel stood on the mountain on the other side: and there was a valley between them.  4 There went out a champion out of the camp of the Philistines, named Goliath, of Gath, whose height was six cubits and a span.  5 He had a helmet of brass on his head, and he was clad with a coat of mail; and the weight of the coat was five thousand shekels of brass. 6 He had brass shin armor on his legs, and a javelin of brass between his shoulders.  7 The staff of his spear was like a weaver’s beam; and his spear’s head weighed six hundred shekels of iron: and his shield bearer went before him.  8 He stood and cried to the armies of Israel, and said to them, “Why have you come out to set your battle in array? Am I not a Philistine, and you servants to Saul? Choose a man for yourselves, and let him come down to me.  9 If he be able to fight with me, and kill me, then will we be your servants; but if I prevail against him, and kill him, then you will be our servants, and serve us.”  10 The Philistine said, “I defy the armies of Israel this day! Give me a man, that we may fight together!”......

Saul said to David, “Go; and Yahweh shall be with you.”  38 Saul dressed David with his clothing. He put a helmet of brass on his head, and he clad him with a coat of mail.  39 David strapped his sword on his clothing, and he tried to move; for he had not tested it. David said to Saul, “I can’t go with these; for I have not tested them.” David took them off.

45  Then David said to the Philistine, “You come to me with a sword, and with a spear, and with a javelin: but I come to you in the name of Yahweh of Armies, the God of the armies of Israel, whom you have defied.  46 Today, Yahweh will deliver you into my hand. I will strike you, and take your head from off you. I will give the dead bodies of the army of the Philistines this day to the birds of the sky, and to the wild animals of the earth; that all the earth may know that there is a God in Israel,

Not everyone in this world will be your friend, not if you stand for anything that is.  Some people will hate you and some may even try to harm you (and I mean physically). David had enough faith in God to realize that no mere human being can contend with God and prevail.  Although a mere shepherd boy and without armor, he prevailed against this impressive adversary because he had faith that God was with him. And those five stones... well, I have heard that they were for the rest of Goliath's family!!!!

The next time you are faced with a spiritual test, remember to look beyond the obstacle in front of you and remember that God is bigger than any mere problem you may have!!!  Have courage; do the right thing- even if you have to pay a price for it!!!

PS... It might also be wise to have a back-up plan- remember that bag of stones!!!!