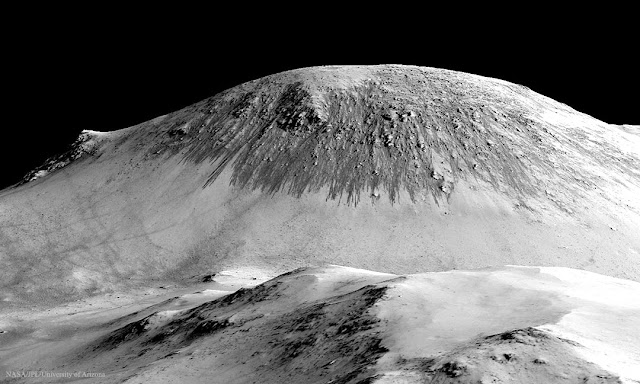 Explanation: What creates these changing streaks on Mars? Called Recurring Slope Linea (RSL), these dark features start on the slopes of hills and craters but don't usually extend to the bottom. What's even more unusual is that these streaks appear to change with the season, appearing fresh and growing during warm weather and disappearing during the winter. After much study, including a recent chemical analyses, a leading hypothesis has emerged that these streaks are likely created by new occurrences of liquid salty water that evaporates as it flows. The source for the briny water is still unclear, with two possibilities being condensation from the Martian atmosphere and underground reservoirs. An exciting inference is that if these briny flows are not too salty, they may be able to support microbial life on Mars even today. The featured image of a hill inside Horowitz Crater was investigated by instruments aboard the robotic Mars Reconnaissance Orbiter that has been returning data from Mars since 2006.

Is there life on Mars?  It would be reasonable to assume that where there is liquid water, then the possibility of life exists.  Is it then a reasonable PROBABILITY that life does exist (or has existed there) there?  By my thinking- it is at least a remote possibility!  However, I do not KNOW that it has (or ever did).  What does the Bible say about life on Mars?

What it does say is that...

9  God said, “Let the waters under the sky be gathered together to one place, and let the dry land appear”; and it was so.  10 God called the dry land “earth”, and the gathering together of the waters he called “seas”. God saw that it was good.  11 God said, “Let the earth yield grass, herbs yielding seeds, and fruit trees bearing fruit after their kind, with their seeds in it, on the earth”; and it was so.  12 The earth yielded grass, herbs yielding seed after their kind, and trees bearing fruit, with their seeds in it, after their kind; and God saw that it was good. 13 There was evening and there was morning, a third day.

20  God said, “Let the waters abound with living creatures, and let birds fly above the earth in the open expanse of sky.”  21 God created the large sea creatures and every living creature that moves, with which the waters swarmed, after their kind, and every winged bird after its kind. God saw that it was good.  22 God blessed them, saying, “Be fruitful, and multiply, and fill the waters in the seas, and let birds multiply on the earth.”  23 There was evening and there was morning, a fifth day.

31  God saw everything that he had made, and, behold, it was very good. There was evening and there was morning, a sixth day.

God created everything out there, which includes Mars. My Bible does not include anything about life on Mars. It does have plenty to say about creation, but its focus is with reference to THIS PLANET and its life. More importantly, it discusses the creation of humans, who are its ruler. If God had felt it necessary for us to know about other life on other planets, he would have told us. Until humans actually FIND LIFE elsewhere, life on MARS is simply a matter of speculation, nothing more.

No more speculation- be silent, Gary!!!!