From Gary... Instructed in WHAT? 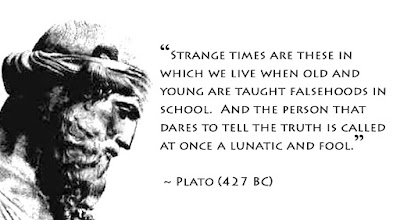 And as Jesus spoke THE TRUTH.


30  As he spoke these things, many believed in him.  31 Jesus therefore said to those Jews who had believed him, “If you remain in my word, then you are truly my disciples.   32  You will know the truth, and the truth will make you free.”

33  They answered him, “We are Abraham’s seed, and have never been in bondage to anyone. How do you say,‘You will be made free’ ?”


34  Jesus answered them, “Most certainly I tell you, everyone who commits sin is the bondservant of sin.   35  A bondservant doesn’t live in the house forever. A son remains forever.   36  If therefore the Son makes you free, you will be free indeed.   37  I know that you are Abraham’s seed, yet you seek to kill me, because my word finds no place in you.   38  I say the things which I have seen with my Father; and you also do the things which you have seen with your father.”


39  They answered him, “Our father is Abraham.”
Jesus said to them, “If you were Abraham’s children, you would do the works of Abraham.   40  But now you seek to kill me, a man who has told you the truth, which I heard from God. Abraham didn’t do this.   41  You do the works of your father.”


They said to him, “We were not born of sexual immorality. We have one Father, God.”


42  Therefore Jesus said to them, “If God were your father, you would love me, for I came out and have come from God. For I haven’t come of myself, but he sent me.   43  Why don’t you understand my speech? Because you can’t hear my word.   44  You are of your father, the devil, and you want to do the desires of your father. He was a murderer from the beginning, and doesn’t stand in the truth, because there is no truth in him. When he speaks a lie, he speaks on his own; for he is a liar, and its father.   45  But because I tell the truth, you don’t believe me.   46  Which of you convicts me of sin? If I tell the truth, why do you not believe me?   47  He who is of God hears the words of God. For this cause you don’t hear, because you are not of God.”


48  Then the Jews answered him, “Don’t we say well that you are a Samaritan, and have a demon?”


52  Then the Jews said to him, “Now we know that you have a demon. Abraham died, and the prophets; and you say, ‘If a man keeps my word, he will never taste of death.’   53 Are you greater than our father, Abraham, who died? The prophets died. Who do you make yourself out to be?”


57  The Jews therefore said to him, “You are not yet fifty years old, and have you seen Abraham?”


58  Jesus said to them, “Most certainly, I tell you, before Abraham came into existence, I AM. ”


59  Therefore they took up stones to throw at him, but Jesus was hidden, and went out of the temple, having gone through their midst, and so passed by.

The quote from Plato shows us that people have been taught falsehoods for literally thousands of years and those who tell the truth are derogatorily slandered. Why? Power, I imagine.  The one who controls the reality of a thing, controls the one who believes this reality. And condemning those who speak THE truth naturally follows.

The benefit of truth is that it frees you from lies (8:32, above). Truth goes beyond this world and is everlasting. And if you would like to be free from lies (and therefore death) eternally, it follows that you must follow the one who has THE POWER to overcome death and the father of all lies (the devil 8:43-47). Jesus reveals himself as God (8:58) and those who were the sons of the devil wanted to destroy him then and do so until this day.

Things have not changed much; our education system has become so corrupt with liberal lies that some have even tried to petition away the first amendment of our constitution. They have chosen sides with the devil and are worthy of this condemnation...

If you are NOT being called a lunatic or a fool- ask yourself, WHY?