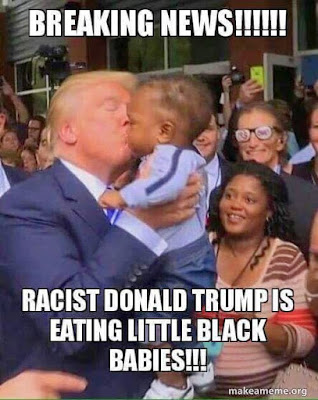 Recently, Hillary Clinton has been making news because of her comments about "Fake News". In my opinion, no one is more "Fake" than she is. Frankly, I am disgusted at the lengths the "Democratic" party will go to malign President-elect trump!!!


Trump won the election, but the left will simply not accept it and are doing anything and everything they can to destroy our way of life!  Their latest abomination is tampering with the electoral college, an institution which has served our country well since its beginning.

I really shouldn't be surprised, as they are ignorant and ungodly- all!!!

Reminds me of this passage from the apostle Peter's second epistle...

15 Regard the patience of our Lord as salvation; even as our beloved brother Paul also, according to the wisdom given to him, wrote to you,  16 as also in all of his letters, speaking in them of these things. In those, there are some things that are hard to understand, which the ignorant and unsettled twist, as they also do to the other Scriptures, to their own destruction. (emp. added vs. 16b GDR) 17 You therefore, beloved, knowing these things beforehand, beware, lest being carried away with the error of the wicked, you fall from your own steadfastness.

If the Democratic party would be low enough to boo God (remember their last convention) imagine what a loyal Democrat will do with the Scriptures?? Just saying....
Email ThisBlogThis!Share to TwitterShare to FacebookShare to Pinterest
Newer Post Older Post Home