Something better by Gary Rose 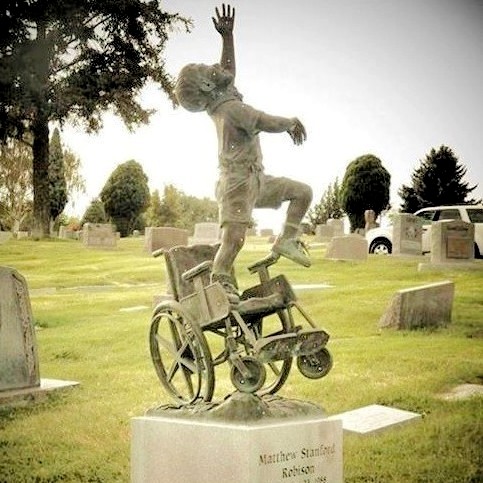 Graveyards (most often called cemeteries) are sobering places. It is a real eye-opener to view all the graves, read the engravings and wonder about the lives of those interred there.

Death is an equal-opportunity destroyer. We all will die someday; not a very pleasant thought, but one worthy of consideration.

The picture shows a young crippled boy being released from his disabled body at death. But, I wonder, what kind of body will he have in the afterlife?

The Apostle Paul addresses this very topic (and more) in the following passage in his first letter to the Corinthian church...

1 Corinthians, Chapter 15 (WEB)
35 But someone will say, “How are the dead raised?” and, “With what kind of body do they come?”  36 You foolish one, that which you yourself sow is not made alive unless it dies.  37 That which you sow, you don’t sow the body that will be, but a bare grain, maybe of wheat, or of some other kind.  38 But God gives it a body even as it pleased him, and to each seed a body of its own.  39 All flesh is not the same flesh, but there is one flesh of men, another flesh of animals, another of fish, and another of birds.  40 There are also celestial bodies and terrestrial bodies; but the glory of the celestial differs from that of the terrestrial.  41 There is one glory of the sun, another glory of the moon, and another glory of the stars; for one star differs from another star in glory.  42 So also is the resurrection of the dead. The body is sown perishable; it is raised imperishable.  43 It is sown in dishonor; it is raised in glory. It is sown in weakness; it is raised in power.  44 It is sown a natural body; it is raised a spiritual body. There is a natural body and there is also a spiritual body.

45 So also it is written, “The first man, Adam, became a living soul.” The last Adam became a life-giving spirit.  46 However that which is spiritual isn’t first, but that which is natural, then that which is spiritual.  47 The first man is of the earth, made of dust. The second man is the Lord from heaven.  48 As is the one made of dust, such are those who are also made of dust; and as is the heavenly, such are they also that are heavenly.  49 As we have borne the image of those made of dust, let’s also bear the image of the heavenly.  50 Now I say this, brothers, that flesh and blood can’t inherit God’s Kingdom; neither does the perishable inherit imperishable.


51 Behold, I tell you a mystery. We will not all sleep, but we will all be changed,  52 in a moment, in the twinkling of an eye, at the last trumpet. For the trumpet will sound and the dead will be raised incorruptible, and we will be changed.  53 For this perishable body must become imperishable, and this mortal must put on immortality.  54 But when this perishable body will have become imperishable, and this mortal will have put on immortality, then what is written will happen: “Death is swallowed up in victory.”

Who has the victory?

1 Corinthians, Chapter 15 (WEB)
1 Now I declare to you, brothers, the Good News which I preached to you, which also you received, in which you also stand,  2 by which also you are saved, if you hold firmly the word which I preached to you—unless you believed in vain.  3 For I delivered to you first of all that which I also received: that Christ died for our sins according to the Scriptures,  4 that he was buried, that he was raised on the third day according to the Scriptures,

Those who believed the Good News and have stood faithful in their faith is Paul's answer. The truth: Jesus died for our sins, he was buried and raised from the dead.

What will our resurrected body be like? God's spiritual creation, an immortal body. How will be look? Good question. I don't know. But, from the Corinthians passage I think it will be wonderful. Something to rejoice about, and not just for the disabled either!!!
Email ThisBlogThis!Share to TwitterShare to FacebookShare to Pinterest
Newer Post Older Post Home