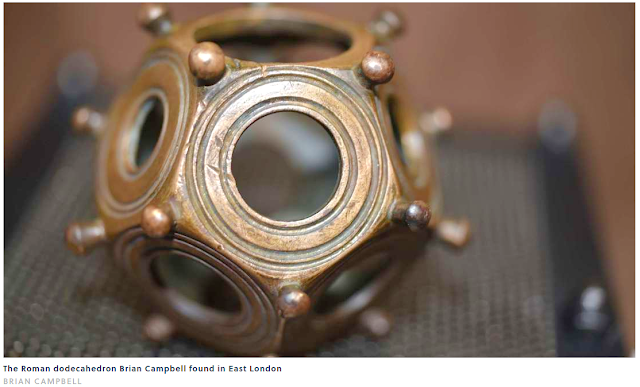 The title says “The Roman dodecahedron..”, but that is just the shape of the object. No one knows exactly what it is or what it was used for. Some say it was used in surveying, others for divination of ancient Roman gods and still others think it was a child’s toy. We do not know, we can only guess!

So many things in this world are open for discussion and many times it seems like opinions change back and forth endlessly. But, Christianity should NOT be one of those topics. We have two thousand years of Christian history to verify what we believe and credible people like the physician Luke to verify the truth. I enjoy the Gospel bearing his name and the book of Acts, both of which are written clearly and in an straightforward manner. These books give certainty to what we believe and provide a basis for confidence in the religion that Jesus founded. Along with the Apostle Paul’s writings they testify to the certainty of the truth of the Gospel.

Here are but two passages which add reason to believe that Christianity is true!!!

Luke 1 (World English Bible)
1 Since many have undertaken to set in order a narrative concerning those matters which have been fulfilled among us,  2 even as those who from the beginning were eyewitnesses and servants of the word delivered them to us,  3 it seemed good to me also, having traced the course of all things accurately from the first, to write to you in order, most excellent Theophilus;  4 that you might know the certainty concerning the things in which you were instructed. (emphasis added)

1 Corinthians 15 (World English Bible)
1 Now I declare to you, brothers, the Good News which I preached to you, which also you received, in which you also stand,  2 by which also you are saved, if you hold firmly the word which I preached to you—unless you believed in vain.  3 For I delivered to you first of all that which I also received: that Christ died for our sins according to the Scriptures,  4 that he was buried, that he was raised on the third day according to the Scriptures,  5 and that he appeared to Cephas, then to the twelve.  6 Then he appeared to over five hundred brothers at once, most of whom remain until now, but some have also fallen asleep.  7 Then he appeared to James, then to all the apostles, 8 and last of all, as to the child born at the wrong time, he appeared to me also. (emphasis added) 9 For I am the least of the apostles, who is not worthy to be called an apostle, because I persecuted the assembly of God.  10 But by the grace of God I am what I am. His grace which was bestowed on me was not futile, but I worked more than all of them; yet not I, but the grace of God which was with me.  11 Whether then it is I or they, so we preach, and so you believed.

In any court of law, the testimony of many witness confirm a fact. How about 500 of them? Doesn’t it seem reasonable that if that many people saw the resurrected Jesus, they should be believed? And many of those who followed Jesus in the first century were martyred for their faith; doesn’t that provide undeniable proof?

The Truth is: Christianity is true because Jesus really lived, died and rose again. His sacrifice for our sins is the most powerful witness of the love of God that could ever be!!!

Believe these things, for they are true!