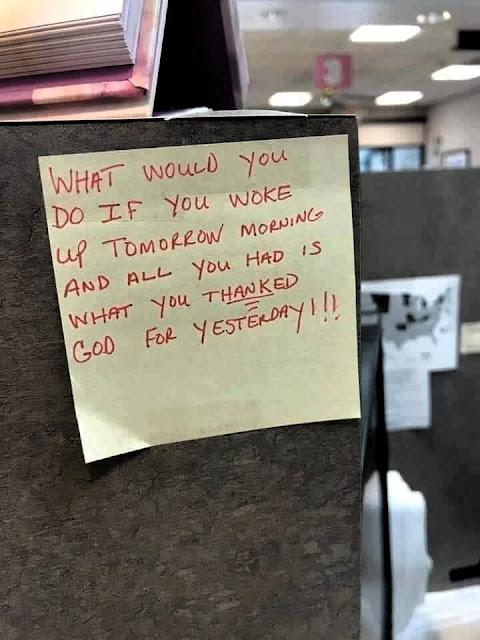 Earlier this month, I had my 70th birthday. To me, it was a turning point in my life, for I had never ever dreamed that I would live this long. Since then, I have begun to think a little differently about life; more about what I have left and less about what I can have. Today, I saw this picture and it made me think about my own prayer life; do I pray enough, do I pray about the right things and more importantly, do I have the right attitude when I pray? Am I really thankful for the things God has given me, or do I just go through the motions? And then there is this passage from the Gospel according to Luke…


Luke 17 ( World English Bible )
Luk 17:11, It happened as he was on his way to Jerusalem, that he was passing along the borders of Samaria and Galilee.
Luk 17:12, As he entered into a certain village, ten men who were lepers met him, who stood at a distance.
Luk 17:13, They lifted up their voices, saying, “Jesus, Master, have mercy on us!”
Luk 17:14, When he saw them, he said to them, “Go and show yourselves to the priests.” It happened that as they went, they were cleansed.
Luk 17:15, One of them, when he saw that he was healed, turned back, glorifying God with a loud voice.
Luk 17:16, He fell on his face at Jesus’ feet, giving him thanks; and he was a Samaritan.
Luk 17:17, Jesus answered, “Weren’t the ten cleansed? But where are the nine?
Luk 17:18, Were there none found who returned to give glory to God, except this stranger?”
Luk 17:19, Then he said to him, “Get up, and go your way. Your faith has healed you.”


During the past few years, I have been sick more than when I was younger, but I have never had anything as severe as Leprosy. It must be awful to have such a horrendous, debilitating disease that would ostracize you from society. But what if you were healed, wouldn’t you be thankful? From this account of Jesus healing ten lepers, nine out of the ten didn’t even have enough courtesy to return and thank Jesus for what he had done for them.

Question: Are we like the ungrateful nine or the man who returned to thank Jesus? Before you answer that question, look at the picture once again and consider your own prayer life – I know I will...