The truth is right before your eyes by Gary Rose 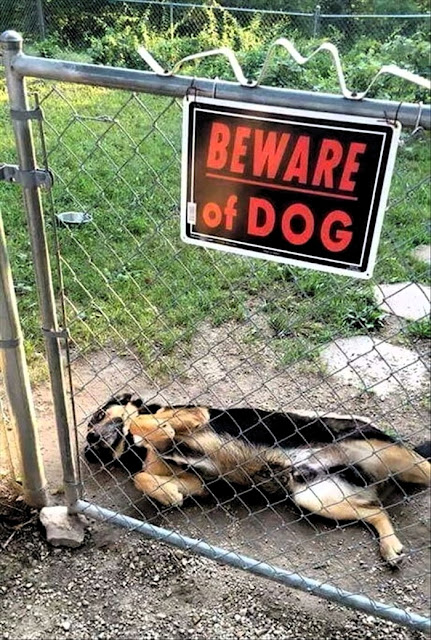 Really? How dangerous can this dog be? Look at that pose; to describe it in a word- SUBMISSIVE. Yet the property owner would have you beware? I don’t believe that for a minute. The sad fact is that “people lie”. They do this for all sorts of reasons, all of them misguided (at best). If someone were to describe you, what would they say? Hopefully, it would be something positive, but what if it was very negative, but untrue. In thinking about this, I remembered a passage from the book of Acts…

Acts 28 ( World English Bible )
[16] When we entered into Rome, the centurion delivered the prisoners to the captain of the guard, but Paul was allowed to stay by himself with the soldier who guarded him.
[17] It happened that after three days Paul called together those who were the leaders of the Jews. When they had come together, he said to them, “I, brothers, though I had done nothing against the people, or the customs of our fathers, still was delivered prisoner from Jerusalem into the hands of the Romans, [18] who, when they had examined me, desired to set me free, because there was no cause of death in me. [19] But when the Jews spoke against it, I was constrained to appeal to Caesar, not that I had anything about which to accuse my nation. [20] For this cause therefore I asked to see you and to speak with you. For because of the hope of Israel I am bound with this chain.” [21] They said to him, “We neither received letters from Judea concerning you, nor did any of the brothers come here and report or speak any evil of you. [22] But we desire to hear from you what you think. For, as concerning this sect, it is known to us that everywhere it is spoken against.”
[23] When they had appointed him a day, many people came to him at his lodging. He explained to them, testifying about the Kingdom of God, and persuading them concerning Jesus, both from the law of Moses and from the prophets, from morning until evening. [24] Some believed the things which were spoken, and some disbelieved.

Paul was a Christian, a follower of Jesus called Christ. Unfortunately, many of the Jews would simply not accept the facts about Jesus. They spoke against Jesus and his followers and their hate led to persecution of good people trying to be faithful to God. Today, unbelieving people are beginning to do the same, especially in the media. However, the fact is that genuine Christians are very good people. I don’t care what people say, what signs they may make; look at what Christians do and decide for yourself. Jesus said the following words:

Matthew 5 (WEB)
[10] Blessed are those who have been persecuted for righteousness’ sake, for theirs is the Kingdom of Heaven.
[11] “Blessed are you when people reproach you, persecute you, and say all kinds of evil against you falsely, for my sake. [12] Rejoice, and be exceedingly glad, for great is your reward in heaven. For that is how they persecuted the prophets who were before you.
[13] “You are the salt of the earth, but if the salt has lost its flavor, with what will it be salted? It is then good for nothing, but to be cast out and trodden under the feet of men.
[14] You are the light of the world. A city located on a hill can’t be hidden. [15] Neither do you light a lamp, and put it under a measuring basket, but on a stand; and it shines to all who are in the house. [16] Even so, let your light shine before men; that they may see your good works, and glorify your Father who is in heaven.

To my fellow Christians, I say: No matter what people may say or do to you, be everything Jesus wants you to be, regardless of cost and you will be truly blessed.