An election is coming: Your choice is? by Gary Rose 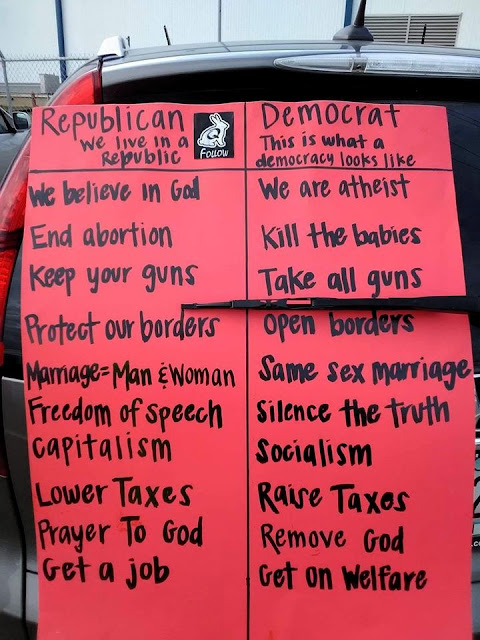 I watched the State of the Union address by our president. For Donald Trump, it was a reserved, very positive speech. Depending upon ones political party- you either loved it or hated it. Frankly, I couldn’t sleep because of the hatred I saw in the house of representatives. This is nothing new, for the Democratic party called for Donald Trump’s impeachment and removal from office even before he became president.

As I lay in bed, I remembered this sign I posted to my Facebook page yesterday. To the best of my knowledge, it accurately reflects the views of both major political parties.

As I lay there praying for this great country, I understood that the uproar for or against what was said really had nothing to do with personalities, but rather about world-views. And I thought of the following Scripture…

Joshua 24 ( World English Bible )
[14]  “Now therefore fear Yahweh, and serve him in sincerity and in truth. Put away the gods which your fathers served beyond the River, in Egypt; and serve Yahweh.  [15] If it seems evil to you to serve Yahweh, choose this day whom you will serve; whether the gods which your fathers served that were beyond the River, or the gods of the Amorites, in whose land you dwell: but as for me and my house, we will serve Yahweh.

Now, that sign is a little crude and unsophisticated, but it does present a choice and a very important one. Frankly, I like both the sign and Joshua’s choice; to me they are the same thing.

Adolph Hitler was a Democratic Socialist!