Look up by Gary Rose 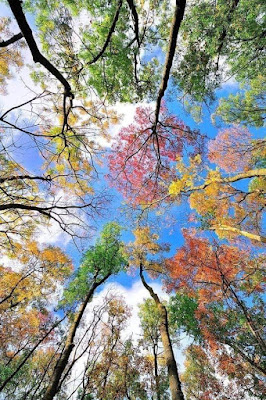 When Linda and I lived in central New Jersey, every year in the fall we would take a very long drive into Pennsylvania to see the foliage. I miss that, for the greenery in Florida is just not the same; beautiful, but different. As I think about it, I have always enjoyed the change of seasons, even from my youth. I especially remember that in the fall I used to go outside and play in the fallen leaves, lay down and just look up at the trees against the sky – Something akin to the scene in the picture.

As a preteen, I remember reading the Bible and thinking about how Jesus used common things and situations to teach spiritual matters and that has stayed with me throughout the decades. I look at the everyday happenings and surroundings and learn from them. Jesus did this in his teachings; here are but a few examples…

Farming (And the Word of God)

1 And again He began to teach beside the sea. And a large crowd was gathered to Him, so that He got aboard into the boat, and sat on the sea; and all the crowd was upon the land by the sea.

2 And He was teaching them many things by parables, and said to them in His teaching:

4 And it happened, as he sowed, that some seed fell alongside the road; and the birds came and devoured it.

5 And some fell on stony ground, where it did not have much earth; and immediately it sprang up because it had no depth of earth.

6 But when the sun rose it was scorched, and because it had no root, it withered away.

7 And some seed fell among thorns; and the thorns came up and choked it, and it yielded no fruit.

8 But other seed fell on good ground, and it was yielding fruit coming up and growing, and it was producing—some thirty fold, some sixty, and some a hundred.”

The Sky (And the signs of the times)

Matt 16:1 Then the Pharisees and Sadducees came, and testing Him, they asked Him to show them a sign out of heaven.

Matt 16:2 He answered and said to them, "When evening comes you say, 'Fine weather, for the sky is red'.

Matt 16:3 And in the morning, 'Today will be stormy, for the sky is red and overcast.' Hypocrites! Indeed you know how to discern the face of the sky, but you cannot discern the signs of the times.

The birds and plants (and Worry)

26 Look at the birds of the air, for they neither sow nor reap, nor do they gather into barns; yet your heavenly Father feeds them. Are you not worth more than they?

27 And which of you by worrying is able to add one cubit to his height?

28 So why do you worry about clothing? Consider the lilies of the field, how they grow; they neither labor, nor spin;

29 and yet I say to you, that not even Solomon in all his glory was arrayed like one of these.

30 But if God so clothes the grass of the field, which is alive today, and tomorrow is cast into the oven, will He not much more clothe you, O you of little faith?

33 But seek first the kingdom of God and His righteousness, and all these things shall be added to you.

34 Therefore do not worry about tomorrow, for tomorrow will worry about its own affairs. Each day has enough trouble of its own.

People around you (the poor and the rich)

19 "Now there was a certain rich man who was clothed in purple and fine linen, enjoying himself splendidly every day.

20 But there was a certain beggar named Lazarus, covered with sores, who had been placed at his gate,

21 and longing to be fed with the crumbs which fell from the rich man's table. And even the dogs came and would lick his sores.

22 And it came to pass that the beggar died, and he was carried away by the angels to Abraham's bosom. The rich man also died and was buried.

23 And being in torments in * Hades, he lifted up his eyes and saw Abraham from afar, and Lazarus in his bosom.

24 Then he cried and said, 'Father Abraham, have mercy on me, and send Lazarus so that he may dip the tip of his finger in water and cool my tongue; for I am suffering in this flame.'

25 But Abraham said, 'Son, remember that in your lifetime you received your good things, and likewise Lazarus bad things, but now here he is comforted and you are suffering.

26 And besides all this, between us and you a great gulf has been fixed, so that those who desire to cross over from here to you are not able, nor may those from there cross over to us.'

27 Then he said, 'Therefore I beseech you, father, that you would send him to my father's house,

28 for I have five brothers, so that he may testify to them, lest they also come to this place of torment.'

29 Abraham said to him, 'They have Moses and the prophets; let them hear them.'

30 And he said, 'No, father Abraham; but if someone from the dead should go to them, they will repent.'

31 But he said to him, 'If they do not hear Moses and the prophets, neither will they be persuaded should one rise from the dead.' "

Salt and Light (To those who would follow him)

1 And seeing the crowds, He went up into the mountain, and after He had sat down, His disciples approached Him.

2 And opening His mouth, He began to teach them, saying:

3 "Blessed are the poor in spirit, for theirs is the kingdom of heaven.

4 Blessed are those who mourn, for they shall be comforted.

5 Blessed are the meek, for they shall inherit the earth.

6 Blessed are those who hunger and thirst after righteousness, for they shall be filled.

7 Blessed are the merciful, for they shall obtain mercy.

8 Blessed are the pure in heart, for they shall see God.

9 Blessed are the peacemakers, for they shall be called sons of God.

10 Blessed are those who have been persecuted for righteousness' sake, for theirs is the kingdom of heaven.

12 Rejoice and be exceedingly glad, for great is your reward in heaven, for so they persecuted the prophets who were before you.

13 "You are the salt of the earth; but if the salt becomes tasteless, with what shall it be salted? It is then good for nothing but to be cast out and to be trampled underfoot by men.

14 You are the light of the world. A city that is set on a hill cannot be hidden.

15 Nor do they light a lamp and put it under a basket, but on a lampstand, and it shines on everything in the house.

16 Let your light so shine before men, that they may see your good works, and glorify your Father who is in heaven.

Today, there is a great emphasis on education. In many circles, if you do not have a college education, you are a nobody. Jesus didn’t have a degree, but his teachings are the most profound you will ever read. Almost my entire life I have attempted to understand what he taught and even in retirement there is still much too learn.

Look up and then inward and begin to learn all that God wants you to know; be amazed, for even the smallest things can teach wonderful spiritual lessons.