A kiss is a nice place to start... 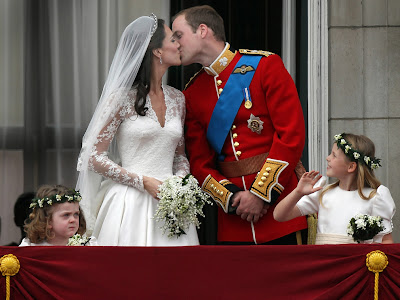 OK, we have seen this on TV, and seen this on TV and again and again and again.  Nice picture!!!  But it occurred to me that this is but a beginning, not an ending.  I wonder how this match will endure?  If by some crazy coincidence they ever should happen to read this, my advice to them would center around this passage from the New Testament.
Ephesians 5:22-33 (WEB)


22) Wives, be subject to your own husbands, as to the Lord.

24) But as the assembly is subject to Christ, so let the wives also be to their own husbands in everything.

25) Husbands, love your wives, even as Christ also loved the assembly, and gave himself up for it;

26) that he might sanctify it, having cleansed it by the washing of water with the word,

27) that he might present the assembly to himself gloriously, not having spot or wrinkle or any such thing; but that it should be holy and without blemish.

28) Even so husbands also ought to love their own wives as their own bodies. He who loves his own wife loves himself.

29) For no man ever hated his own flesh; but nourishes and cherishes it, even as the Lord also does the assembly;

30) because we are members of his body, of his flesh and bones.

31) “For this cause a man will leave his father and mother, and will be joined to his wife. The two will become one flesh.”

32) This mystery is great, but I speak concerning Christ and of the assembly.

33) Nevertheless each of you must also love his own wife even as himself; and let the wife see that she respects her husband.


Marriage is a wonderful thing!!!  But, it takes work; very hard work!!!  Without God in the equation, an almost insurmountable task.  So, if you are married... remember, you marriage may start with a kiss but the chances of it enduring vastly improve if God is with you!!!!
Email ThisBlogThis!Share to TwitterShare to FacebookShare to Pinterest
Newer Post Older Post Home